Mallorca vs Rayo Vallecano- When Mallorca comes to Estadio de Vallecas on Monday night, Rayo Vallecano will try to keep up its good start to the 2021-22 La Liga season.

The home team is currently sixth in the table, just three points behind Atletico Madrid in fourth place. Mallorca is in 13th place, with 15 points from their first 13 games.

As expected, Rayo has been a good team to watch in La Liga this season. They have won six, tied two, and lost five of their 13 games, giving them 20 points and putting them in sixth place in the table.

But Andoni Iraola’s team has been great at home this season. They haven’t lost any of the six games they’ve played in front of their own fans, which is the best home record in the division.

Last season, Los Franjirrojos got back to this level of football by making it to the playoffs in the Segunda Division. This season, they want to make it back-to-back top-flight seasons for the first time since 2016.

Rayo hasn’t played Mallorca in La Liga since April 2013, when the two teams tied 1-1. However, they played each other twice in the second division last season, and each team won its away game.

Mallorca finished second in the Segunda Division last season, which got them back into the top flight right away. They have also shown a lot of good things so far this season.

In fact, they have three wins, six draws, and four losses, which gives them 15 points and puts them in 13th place going into the next set of games.

Mallorca hasn’t lost in Spain’s top league for four games, but all of those games have ended in a tie, including a 2-2 draw with Elche before the international break.

The Pirates have given up 19 goals in La Liga so far this season, which is tied for the third worst defensive record. However, they have scored 13 goals in their 13 games. 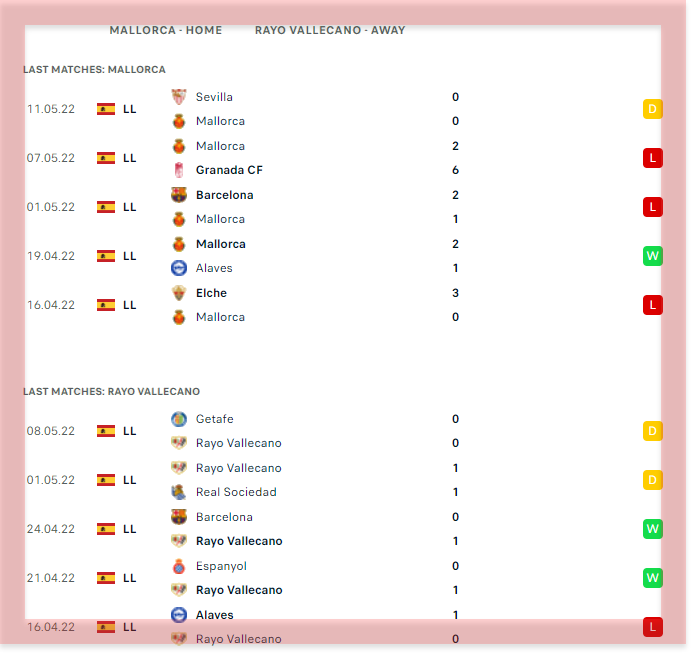