Mallorca vs Rayo Vallecano – On Sunday, Vallecano travels to Mallorca for their final away match of the regular season ,Mallorca has struggled in all of their games this season. They have lost more games than they have won and drawn together. Mallorca has won 8, drawn 9, and lost 19 of their matches this season. Their terrible performance has landed them in eighth place in the league table, with only 33 points. The team still has a chance to avoid relegation if they win their remaining matches.

Mallorca’s last encounter was against Sevilla. The game ended in a goalless tie since neither team could score. This season, Rayo Vallecano’s form has been uneven. Due to their inconsistency, the squad is now ranked 12th in the league with 42 points. After a four-match winning streak, they were defeated in their most recent match. With their present standing, the squad has already earned a spot in La Liga for the following season.

Mallorca and Rayo Vallecano have both struggled to win their matches. Mallorca has been relegated due to their poor performance, while Vallecano has been inconsistent.

Mallorca has unable to obtain the desired results in their home encounters. The team has won two of its previous five matches while losing the other three. Vallecano has won their last three matches in a row after a string of bad away performances. They’ve also kept clean sheets in their last three games. The game is likely to conclude in a Rayo Vallecano victory or a draw. Both clubs have scored under 1.5 goals in recent encounters and are likely to do so again in this one. 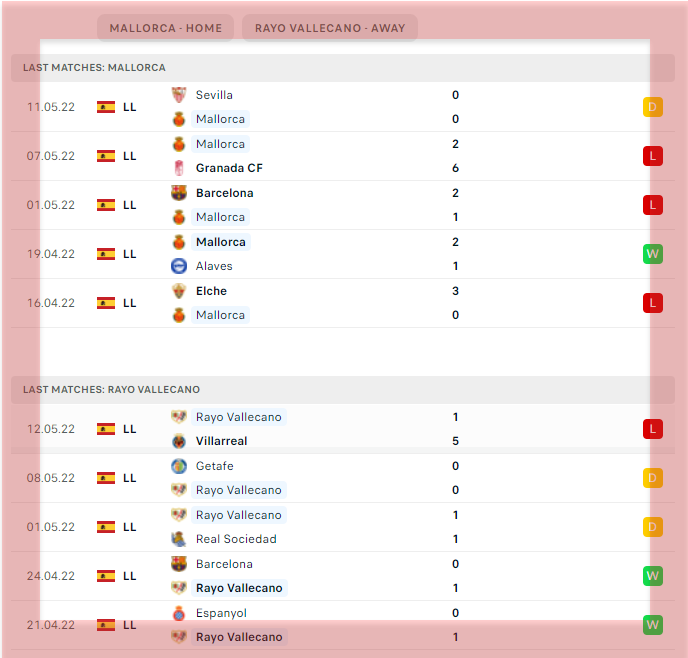