Malaga vs Villarreal B – Preview, and Prediction

Malaga vs Villarreal B – The 2022–23 Malaga club was the first in the Spanish Segunda Division to change managers. The team’s 3-1 defeat at Tenerife last weekend, the team’s fifth loss in its first six games of the current season, prompted the board to take action.

Argentinean manager Pablo Guede was replaced by Pepe Mel, who will attempt to turn around the team’s fortunes over the coming weeks. When Malaga hosts Villarreal B in Gameweek No. 7, it will be very intriguing to see if Mel can start a new-manager bounce and a successful shock on Saturday afternoon.

Mel was only hired on Wednesday, giving him barely three days to assess his resources. Sergio Lozano is one person to whom he needs to pay close attention. The 23-year-old Spanish player has had an incredible stretch of play so far this season with Villarreal’s second squad.

With three goals and five assists in just five games this season, Lozano leads the squad in both scoring and assists. We could expect a lively match at Estadio La Rosaleda because Villarreal B typically plays attacking-minded football.

In each of the last five games played in this league by Villarreal’s second squad, at least three goals were scored. The streak includes a 3-1 victory over Lugo seven days prior as well as a 4-1 loss at Levante in the team’s most recent league away game.

Malaga vs Villarreal B – Betting Analysis

In the past, there was little opportunity for conflict between these two teams. Villarreal B’s last two Segunda Division road games resulted in two difficult losses.

They lost 4-1 against Levante and 3-0 at Granada. Malaga, on the other hand, lost five of their first six games of the season, so we are not at all drawn to the 2.15 odds that are being offered for their victory today.

Instead, we’ll wager on Villarreal B to win at Estadio La Rosaleda with 1.66 odds. Given how aggressive Villarreal B has been so far this season, you can also back goals at both ends at the 1.83 odds.

Malaga vs Villarreal B – Head -to- Head 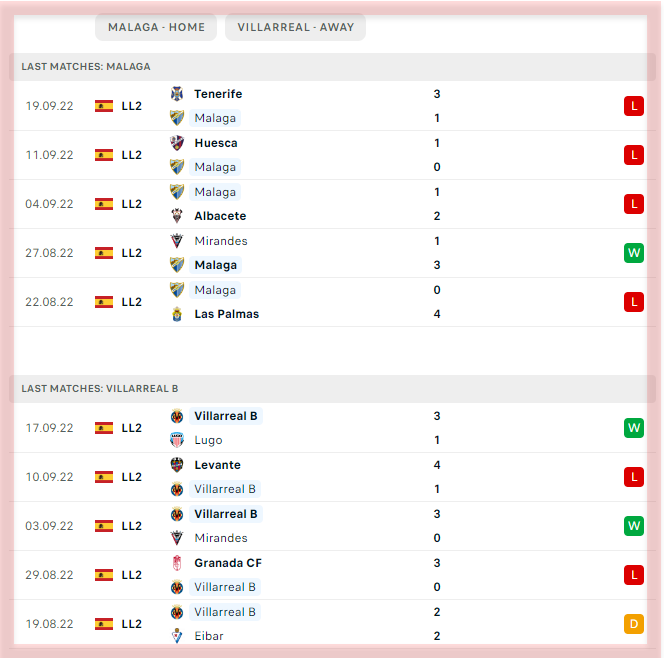