Mainz vs Stuttgart – preview and prediction

Mainz vs Stuttgart – Stuttgart is currently playing with fire. They are ranked 15th in a table of 18 teams, with a one-point lead over the relegation cut-off.

They’ve only won six games this season, and they’re desperate for points now, with only five games remaining.

This air of urgency, on the other hand, may become ugly for them—and especially for their defense. They’ve been giving up a lot of goals from the start of the season, and they don’t have the luxury of concentrating on their defense right now.

Meanwhile, Mainz could make a last-ditch attempt to qualify for Europe. They are now tenth in the rankings and need just six points to catch up to the sixth-placed team. They have five games left to do so, and they are in desperate need of points.

Expect a goal-fest when these two meet, especially since they’re both chasing the three points. The advantage, though, is unquestionably with the hosts, Mainz.

It’s also worth noting that they’ve scored three or more goals in six of their last twelve home games.

Dortmund, on the other hand, fell 0-2 at home to Stuttgart last week. They had lost 13 of their previous 16 games overall, and they had only one league win on the road since May of 2021.

Based on these insights and previous head-to-head statistics, Mainz should win this weekend. And, keeping in mind both parties’ desperation, anticipate goals well ahead of time.

Statistics on Betting
Stuttgart has only won once on the road this season, and only two other teams in the tournament have scored fewer goals than them.
In the meantime, Mainz has only lost twice at this stadium in the current Bundesliga season, one of which was against Dortmund. 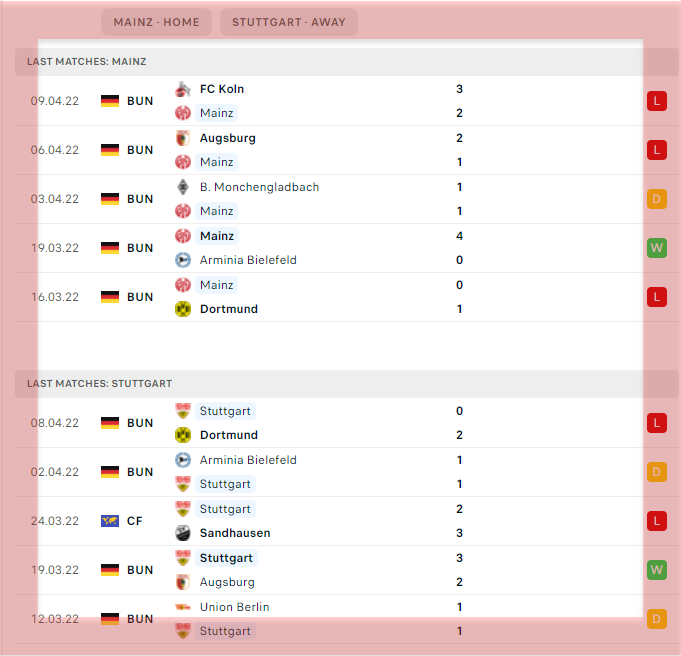