Mainz vs Eintracht Frankfurt – Before their match on the final day of the 2021/22 Bundesliga season, Mainz and Eintracht Frankfurt are separated by only one point. Because the teams are in the midst of the league table, nothing except a top-half finish will be on the line.

Mainz, on the other hand, enters the match as clear favorites, as their opponents are expected to heavily rotate their starting lineup in preparation for the UEFA Europa League final against Rangers. Frankfurt will meet the Scottish heavyweights on Wednesday evening, and head coach Oliver Glasner will almost surely rest his key players ahead of the big final and a chance to make history (Frankfurt won the Europa League for the first time in the 1979/80 season).

In recent months, Eintracht has mostly neglected their domestic league in favor of the Europa League. They have now gone seven games without a win in the Bundesliga. In the last five league games, Glasner’s team has lost three and drawn two. Mainz, on the other hand, is hoping to cap off a good season by winning their third league game in a row.

In the last two games, the team coached by Danish manager Bo Svensson has scored five goals in spectacular victories over Bayern Munich and Hertha Berlin. Can they continue their winning streak against a demotivated Frankfurt?

In only four days, Eintracht Frankfurt will play one of its most important matches in club history. As a result, it will be difficult for head coach Oliver Glasner to encourage his players for this meaningless encounter against Mainz. This is why, at 1.61 odds, we believe the home win is the most rational option, especially given Mainz will be coming off consecutive victories over Bayern. 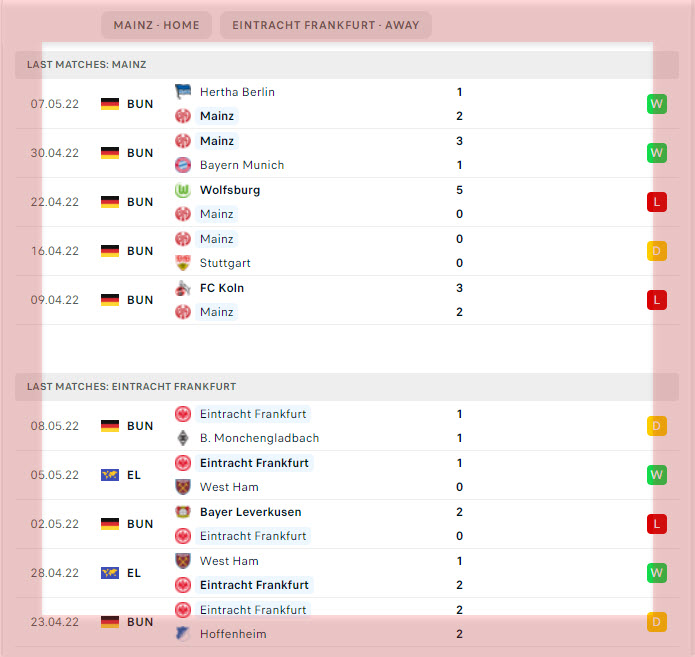 Our Prediction: Under 2.5 goals