Mainz vs Bochum – Following a 1-1 draw against Stuttgart in Bundesliga 1, Mainz gears up for this contest.

In that contest, Mainz had 44% of the ball and 13 shots on goal, with 1 of those being on target. Marcus Ingvartsen scored for Mainz in the 40th second.

Stuttgart had 16 shots on goal at the other end, and only one of them was successful. Stuttgart’s goal came in the 36th minute from Serhou Guirassy.

Recently, games against Mainz have often been exciting ones with lots of goalmouth action predicted. Nine of the 21 goals scored by both teams overall (at an average of 3.5 goals per game) throughout the course of their most recent six games came from Mainz.

After defeating Hertha Berlin 3-1 in their most recent match in Bundesliga 1, VfL Bochum will enter the game.

VfL Bochum enjoyed 49% of the game’s possession, and 3 of its 10 shots on goal were successful. Philipp Hofmann (22′, 56′) and Keven Schlotterbeck (44′) scored goals for VfL Bochum.

Hertha BSC’s 11 shots on goal, of which only one was on target, were from the other end. Hertha Berlin scored through Suat Serdar (87′).

Looking at their recent results, VfL Bochum has allowed 10 goals in their last six games, scoring against them in 5 of those contests.

VfL Bochum’s weaknesses have been revealed in the back. We’ll just have to wait and see whether that tendency holds true in this game.

Looking back at their previous head-to-head matches from February 20, 2010, it appears that both teams have shared the victories, with Mainz winning two of them, VfL Bochum winning two, and two games ending in draws after 90 minutes of play.

They combined to score 14 goals in these games, with Mainz scoring six of them and Bochum scoring eight. It has been 2.33 goals per game on average.

At that point, VfL Bochum had 60% possession and 15 shots on goal, but only one of them was successful. Kevin Stöger (39′) was the scorer.

On the opposite end, Mainz made 13 attempts at goal, scoring on two of them. The scorer was Karim Onisiwo (26′, 77′). Felix Zwayer acted as the official.

In our opinion, Mainz will likely score the goals they require when they take the field against VfL Bochum, who might find it difficult to penetrate their defense.

Checking the latest betting odds for this match on the WDW market, putting your money on Mainz is best priced at 1.67, a bet on the draw is 4.02, and selecting the winning team to be VfL Bochum gets you 4.9. These are the best returns offered right now. 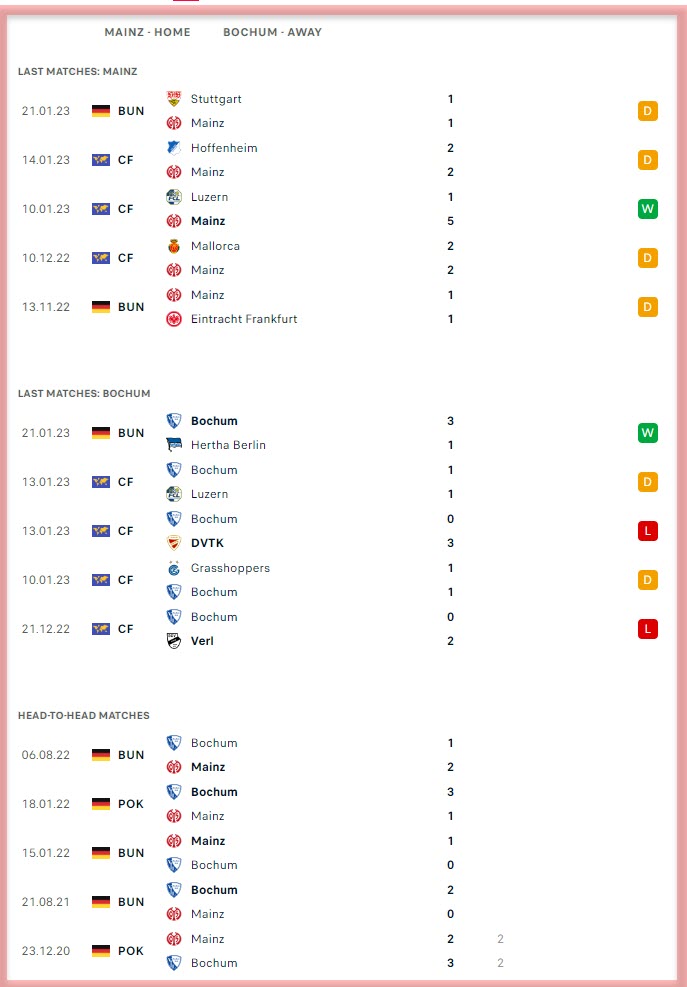