Mainz vs Leverkusen – preview and prediction – team news, and lineups

Mainz vs Leverkusen- Bayer Leverkusen will aim to keep their Bundesliga winning streak alive when they visit the MEWA Arena to face Mainz 05, one of the season’s surprise packages.

The hosts are still outperforming expectations, currently placed eighth in the rankings, while the visitors turned a corner at the start of 2022 and are now firmly in the top three.

Mainz had a minor dip with five defeats in six games – one of which was a friendly – but have rediscovered their form in the last two games.

A 2-0 win against Hoffenheim at home was followed by a respectable draw against fellow overachievers Freiburg at the weekend, with Nils Petersen canceling out Alexander Hack’s opener.

The four points earned in those two games have kept Bo Svensson’s side in contention for a place in the Bundesliga this season.

They will not be able to catch Leverkusen, who lead the race for fourth place by seven points and are even closing in on the big two.

They are the division’s best team right now, having won four straight games and being undefeated since the turn of the year.

As the country’s leading forces – BVB and Bayern Munich – have both suffered stunning defeats in the last fortnight, they have pushed away from the pack and are currently just five points behind Borussia Dortmund in second place.

Mainz’s only injured absentee is defender Jeremiah St Juste, but Svensson has a full complement of players to pick from.

Jonathan Burkardt, who has scored seven goals in 11 Bundesliga games but none in the last eight, will be desperate to end his goal drought before being benched.

Patrik Schick of Leverkusen has 11 goals in his last nine games and 19 for the season after scoring his side’s fourth in their 4-2 win over Stuttgart.

Moussa Diaby has also contributed to the goals, scoring five in Die Werkself’s four-game winning streak, and he will play in the attacking three behind Schick. Piero Hincapie will likely move to left-back as a result of Mitchel Bakker’s one-match suspension for his fifth yellow card of the season, while Karim Bellarabi is unavailable due to illness. 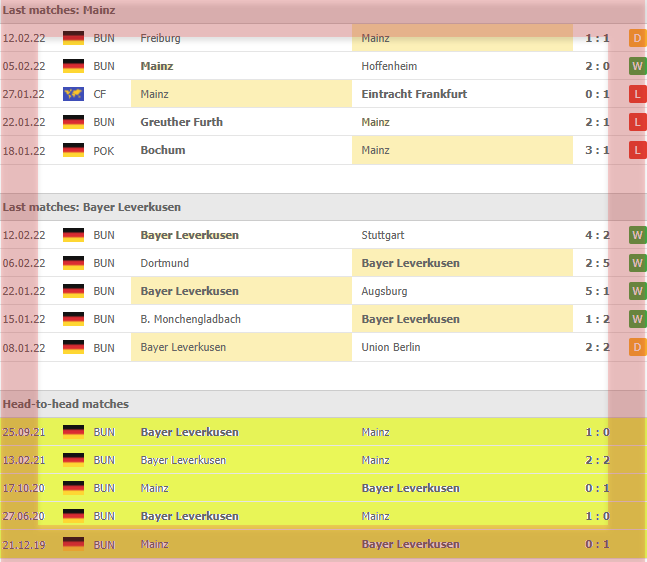