Macarthur vs Newcastle Jets – Newcastle Jets are looking to get back on track after losing their previous three games in a row against Macarthur FC, who have also lost back-to-back games. This Sunday, these two teams will face off at Campbelltown Stadium. With 32 points from 24 games, Macarthur FC is ranked 87th in the standings. In the league, they won nine times, drew five times, and lost ten times. Their troubles on the defensive end of the field have also been a crucial concern, as they have conceded 43 goals so far, despite being solid on the offensive end with 37 goals.

After a 1-4 league loss to Melbourne Victory in their previous match, the Bulls will be hoping for a better result here. In their last six meetings, both teams have scored a total of 21 goals, with Macarthur FC accounting for only 9 of them. They only need two more points to qualify for the league quarterfinals. The Jets, on the other hand, are in 9th place on the standings with 25 points. They won seven games out of the 23 they played, drew ten times, and lost 14 times. They score goals very evenly, but they also concede the same amount, resulting in a 41:40 goal ratio.

Newcastle Jets also lost their previous league schedule versus Central Coast Mariners by a score of 2-4. It’s probable that we’ll see a pair of goals here, since the Jets’ past five games have all finished with two goals or more.

This season, Macarthur has gone undefeated in 72 percent of its home games. The home team has scored in each of their last three games in front of their own fans, and they have yet to lose to this visiting team.

Meanwhile, the Newcastle Jets have just won one away game all season and are abysmal when it comes to road performance. They’ve even lost their last two away games in a row. 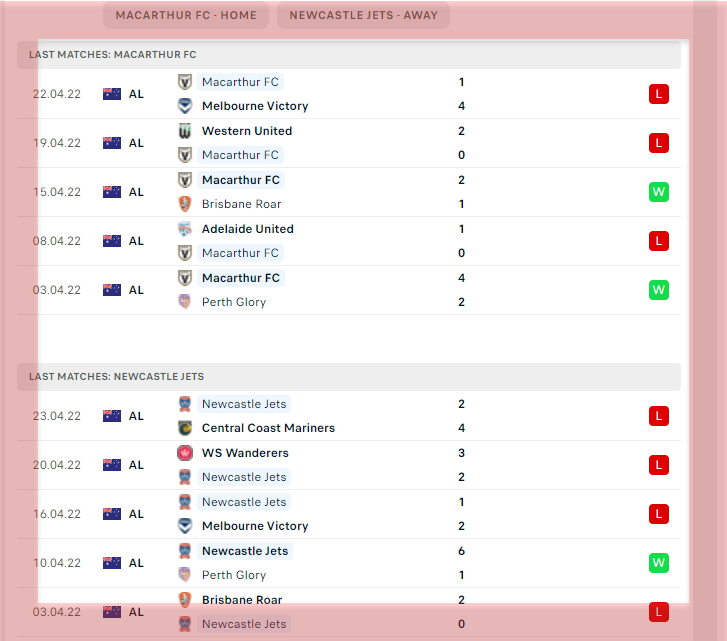