Lyon vs. Nice – preview and prediction – team news, and lineups

Lyon vs Nice: Despite losing their first Ligue 1 match of 2022, 2-0 away to Monaco last weekend, Lyon still have a chance to extend their unbeaten streak at Groupama Stadium to six games in all competitions when they welcome Nice on Saturday.

Les Gones sit in eighth place in the table with 34 points, three points from a European berth next season, while Nice went to the Coupe de France semi-finals on Wednesday, defeating Marseille 4-1.

Damien Da Silva and Jason Denayer are nursing ankle injuries, Lenny Pintor and Jeff Reine-Adelaide are nursing ACL difficulties, Tino Kadewere has a muscular problem, and Rayan Cherki is not anticipated back until May at the earliest after suffering a broken foot at the Africa Cup of Nations a week ago.

Last Saturday, Anthony Lopes, who leads the league with 75 saves, conceded multiple goals for the first time since December 5 when former teammate and current Monaco midfielder Jean Lucas put one past him in the second minute, with the other strike coming from the league’s top goalscorer Wissam Ben Yedder.

Nice overcame Marseille this week thanks to a brace from Justin Kluivert, as well as goals from Amine Gouiri and Andy Delort, while Marcin Bulka only faced two shots and was supported by some excellent defensive work from Flavius Daniliuc, Jean-Clair Todibo, Dante, and Melvin Bard.

Walter Benitez is scheduled to miss this match as he recovers from a positive COVID test, while Jordan Amavi is dealing with a knee problem. 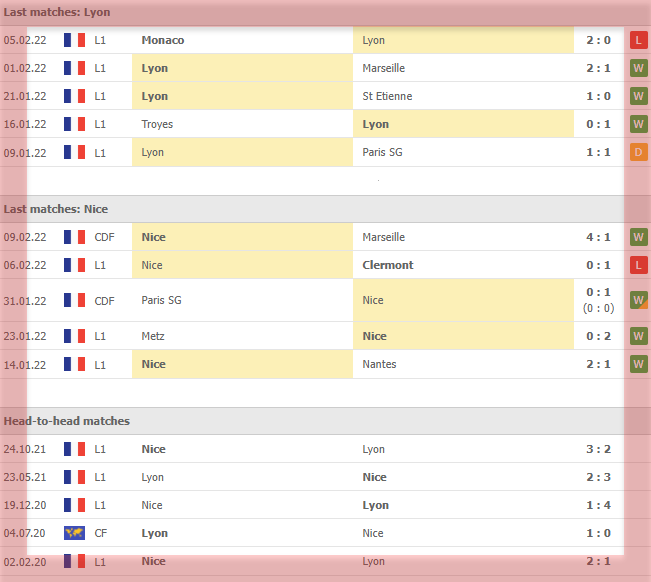