Lyon vs AC Ajaccio – In the inaugural match of the 2022–23 French Ligue 1 season, Olympique Lyon will play host to AC Ajaccio. Peter Bosz is under immediate scrutiny after leading Lyon to a ninth-place finish in the league the previous year.

But in front of their home fans, the Dutch coach moulded his club into an effective attacking force. It turned out that they scored fewer goals at home than both PSG and Rennes combined for.

Their performance in the last third was drastically different when they were on the road. They averaged slightly over a point per game, and the Bad Gones’ fanbase will be sad to see them miss out on European night games this year due to their performance.

After nine years away from Ligue 1, AC Ajaccio has qualified for promotion after finishing second in Ligue 2. It has been four years since they competed in this league.

The squad that Olivier Pantaloni coached to the runner-up spot in Ligue 2 last year was promoted to the top flight. In both the 2017–18 and 2019–20 seasons, they were nearly promoted to Ligue 1.

Their stalwart defensive efforts were crucial to their success. Only a handful of clubs have ever allowed only 19 goals in a season. Meanwhile, Pantaloni will have some qualms about his team’s weak attacking front, which managed only a few meagre goals in the previous campaign.

Three of the last five head-to-head matchups favour Lyon, while the other two favour Ajaccio. The host team usually wins this matchup. OL has won 7 of the last 8 home matchups against their rivals.

In February of 2021, the teams squared off at the Groupama Stadium for the Coupe de France. The Lyon team, coached by Rudi Garcia, won by a score of 5-1.

In 11 of their 12 head-to-head matchups, at least one team scored. Eight of those matches had over 2.5 goals. The Lyon squad is unbeaten in their last 19 opening day Ligue 1 matches. If you start with the first home game of the season, you can extend the time frame all the way back to 1999.

With Alexandre Lacazette back in the lineup and playing in front of their home crowd, the already potent offensive unit will be even more deadly. They should have no trouble at all against the promoted team.

However, Peter Bosz has doubts about the defence. Romain Hamouma, Thomas Mangani, and Riad Nouri all have extensive experience in Ligue 1 and are available to Ajaccio.

Even though the defence allowed only three clean sheets all of last season, the three should still find the back of the net. Thus, the best bet for this French Ligue 1 match is on over 2.5 goals scored by both teams.

In addition, we are betting on Moussa Dembele to score the opening goal in this match rather than Lacazette, who scored the inaugural goal in this stadium back in 2016. 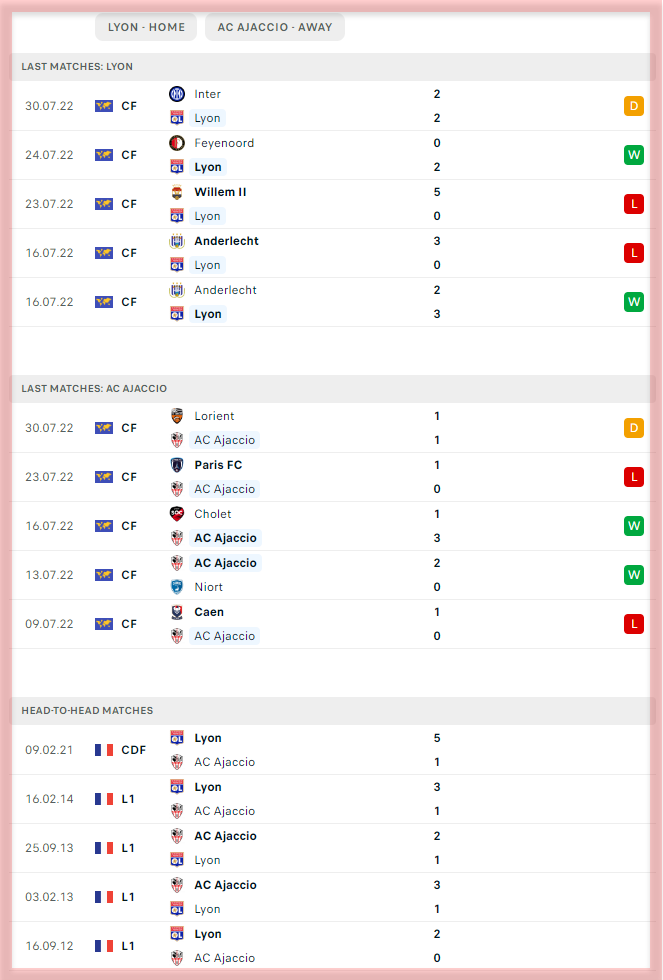