Luxembourg vs Faroe Islands – Luxembourg has recently had a string of poor results. Their recent results have likewise been generally winless.

They had just lost a friendly match on the road to Bosnia and Herzegovina by a score of 1-0. It was their second consecutive friendly defeat.

They sped up the pace by winning back-to-back games in the Nations League group stage. However, they remain in second place because the current leader, Turkey, leads by a large margin in terms of goals and points.

They’ll be trying to secure more of those in order to take over the top spot. Meanwhile, the Faroe Islands have recently been in a state of flux.

Their recent record is largely devoid of victories. In their most recent match, they won 1-0 at home against Liechtenstein in a friendly match, which is the first positive result they have had since October of last year.

The Faroe Islands did the same thing in this year’s Nations League match. They stayed the same, losing back-to-back games in the group stage while also failing to keep a clean sheet.

Before losing 0-1 to Luxembourg in the reverse fixture this season, Faroe Islands had a 21-year unbeaten record of two head-to-head encounters.

Their most recent meeting at this location was a friendly match that concluded in a 0-0 tie. Luxembourg’s home run is not particularly outstanding at the moment.

Their transition from inconsistent to losing was rapid, and they are now on a four-game losing run in all competitions.

Faroe Islands, on the other hand, have yet to win on the road since 2020. They haven’t won in a long time and have a terrible defense. Their first match on the road this season was against Turkey, which they lost 4-0.

Based on the aforementioned data, we believe Luxembourg has a stronger probability of winning this match, especially given Faroe Islands’ current poor form. 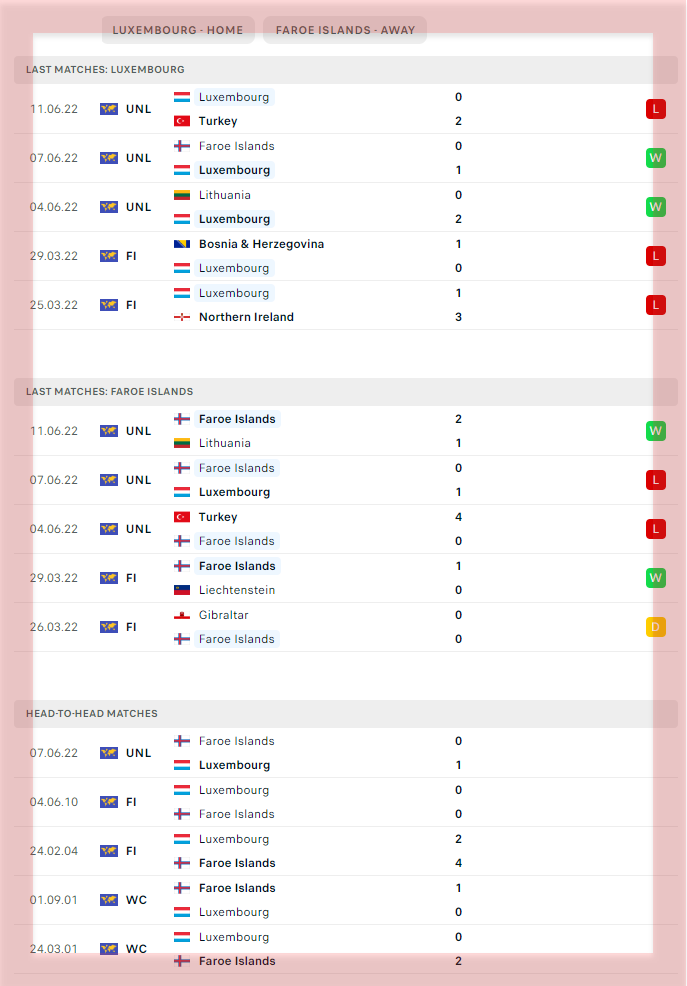