Luton vs Huddersfield – Preview, and Prediction

Luton vs Huddersfield – Despite their injury difficulties and a total squad valuation better than only three other Championship sides, Luton Town have made the play-offs. Former EFL Championship Manager of the Season Nathan Jones might become a club legend if he can successfully navigate three more games and achieve promotion.

Luton have made the Football League play-offs twice before, both times losing in the semi-finals. To buck the trend, they must at least score against Huddersfield Town, as they failed to do in both regular season meetings (D1, L1). The omens are favourable, as Jones’ players have scored in six of their last 10 visits to Kenilworth Road (W6, D2, L2).

But unlike Luton, Huddersfield haven’t been in the Premier League since 2018/19, so their play-off run isn’t quite as magical. The visitors have momentum, having won six of their past seven regular season games (D1), five by 2-0 or 2-1 scores.

The Terriers have won three of their past four away games, and only Blackpool (six) have achieved promotion via the play-offs more frequently than the Terriers. Only three other teams had a better undefeated record as away league outsiders this season than Huddersfield (70 percent – W8, D6, L6).

Watch out for Harry Cornick (Luton) who has scored the winning goal in two of his previous three appearances, and Danny Ward (Huddersfield) who assisted both goals in their final day victory. 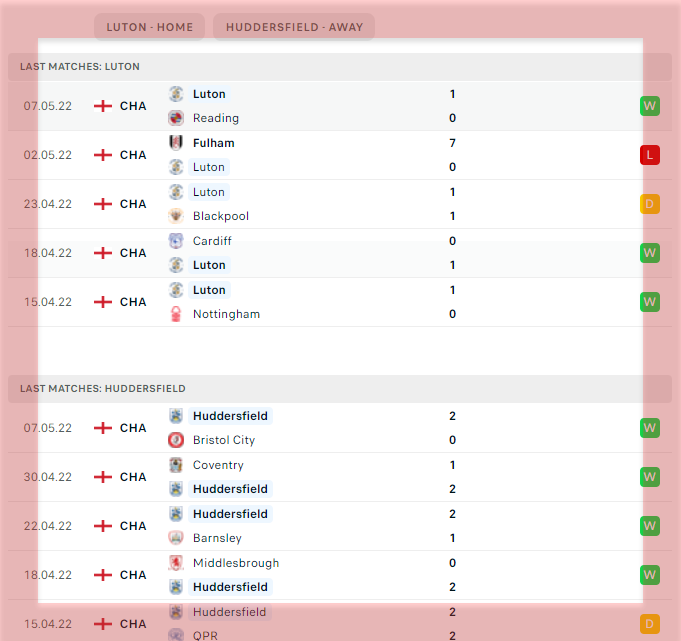 Our Predictions: over 1.5 goals