Lorient vs Lyon – preview and prediction – team news, and lineups

Lorient vs Lyon – Lorient won a vital match against Brest on Sunday. Ibrahima Kone, a late-game substitute, made the difference by scoring the game’s sole goal. After Brest’s center-back Brendan Chardonnet was sent off 29 minutes into the game, Lorient had an extra man on the pitch for an hour.

Nonetheless, the team led by Christopher Pelissier put in another excellent defensive effort, as Brest had no shots on target on this occasion. Lorient have been notoriously difficult to break down in recent years. In the last four league rounds, they have only conceded one goal.

Lorient is now two points clear of the relegation zone, and they will be looking for an upset tomorrow evening when they welcome Lyon at Stade Yves Allainmat – Le Moustoir in the first encounter of Gameweek No 27. Lyon will enter the match in an entirely different mood after losing 0-1 at home to Lille on Sunday.

During the 90 minutes of play, Peter Bosz’s team dominated the pitch and even scored a late 86th-minute goal through Lucas Paqueta, but the goal was disallowed. Lyon, like their opponents, has recently played a number of low-scoring games. They haven’t scored three or more goals in any of their last four league games.

The Under 2.5 goals FT is by far the most cost-effective wager. Lorient has been rock-solid defensively in recent weeks, whereas Lyon has failed to excite in the last third. You may put your money on this situation at 1.90 odds.

In terms of the outcome, the draw at 3.75 odds is unquestionably the best bet. Only one of Lyon’s last five league away matches has ended in a win, while only two of their previous six H2H meetings with Loreint have ended in a win.

In their past six head-to-head matches, the teams have a combined record of two wins, draws, and losses, with both teams scoring in each of the last four meetings. Only seven of Lyon’s last sixteen away games against Lorient have resulted in a victory. 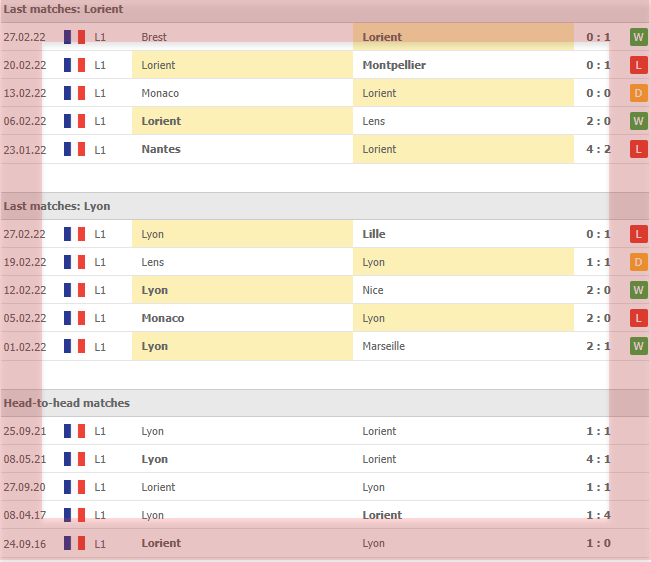