Liverpool vs Wolves -Preview, and Prediction

Liverpool vs Wolves – Man City’s victory over Aston Villa will clinch their fourth Premier League title in five years, whatever of Liverpool‘s result.

Strange things can happen on the final day, and there is a certain fatefulness about Gerrard, maybe Liverpool’s greatest ever player and surely the best to have never won the title, finally sealing the trophy for his boyhood club by creating final-day drama to rival 1989 and 2012.

Arsenal’s triumph at Anfield on the final day of the 1989 season was the last occasion Liverpool lost their final home game of the season. Since then, they’ve won 13 and drawn two.

Liverpool have won five and drawn one of their final-day games under Klopp, and he has emphasised the importance of focusing entirely on Wolves rather than developments at the Etihad.

Should they win their 28th game of the season, they will finish with 92 points, their third-highest total and enough to win 24 of the past 29 Premier League titles.

Liverpool could be forgiven for prioritizing next Saturday’s Champions League final in Paris, game 63 of a rigorous and demanding season. Failure to capitalize on any Man City slip-up is galling, but they will be favorites to win this weekend.

Liverpool has conceded only two league goals at Anfield since the start of the year and won 37 of the past 39 points at home . The 19-time English champions have won all 10 Premier League encounters with Wolves, preserving eight clear sheets.

Wolves have lost 17 of 19 league games at Anfield, and their last triumph was 12 years ago. That includes a 5-1 home loss to Man City earlier this month, but they’re still ninth and guaranteed another top-half finish – their third in four seasons since promotion.

Wolves scored 37 goals this season, fourth-fewest in the Premier League. Only Burnley in 2017-18 finished in the top eight with less.

Wolves have the joint-lowest victory rate on the last day of the season of any Premier League club, losing six and winning one. If Liverpool lose on Sunday, Klopp can turn his attention to the Etihad and Paris.

Liverpool vs Wolves -Head To Head 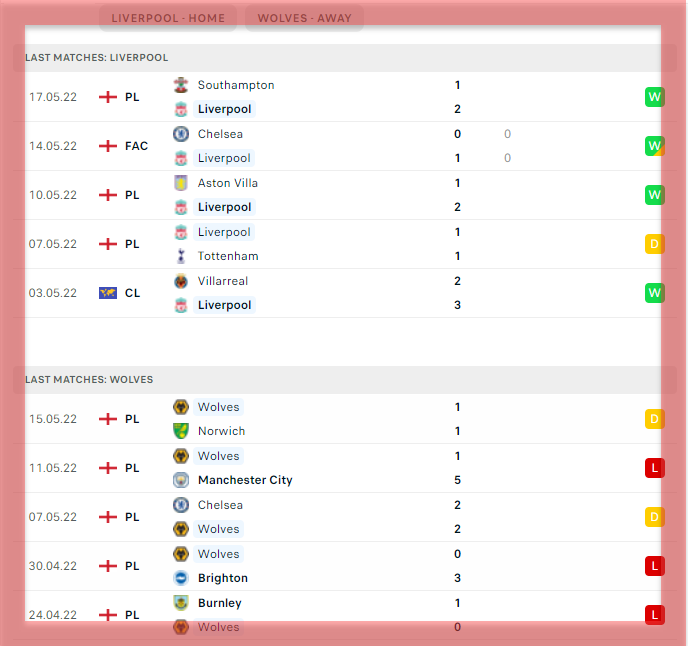