Liverpool vs Leeds – Preview, and Prediction

Liverpool vs Leeds – Liverpool is making every effort to return to the top of the table, but they are unable to accomplish it due to a lack of consistency. However, they will be considered the favourites against the struggling Leeds this Saturday because they play at home.

In a 20-team table, Leeds is positioned 18th, smack in the middle of the relegation zone. Through the entire season, they have only won twice, and they presently hold the longest active losing run in the league.

In reality, save from one away game, they have a 100% losing record. And Jurgen Klopp is adamant that this happen. His team is at ninth in the standings and needs an additional five points to tie Chelsea, who are currently in fifth place.

Since the beginning of the season, their overall performance has not been particularly noteworthy, especially for a team of their calibre. They are having success at home, though.

They are one of the select few Premier League teams that have never lost in front of their home crowd. They actually have a flawless winning record at home, with just two draws.

Additionally, they have an outstanding head-to-head record versus this opponent over the years. Due to all of these factors, Liverpool should prevail at Anfield on Saturday.

The Reds prevailed 6-0 in the most recent game. Nine of their last eleven meetings were victories. The hosts are on a five-game winning streak at this location. It has been 21 years since the visitors triumphed here.

Liverpool are still a threat to be dealt with at home despite all of their problems. In actuality, Virgil Van Dijk joined the team four years ago, and he has yet to drop a league game at this venue. They are consistently this way.

Leeds, on the other side, has the longest losing streak in the Premier League and hasn’t won since August in all competitions. Additionally, they have a fairly dismal history against this opponent.

Liverpool vs Leeds – Head -to- Head 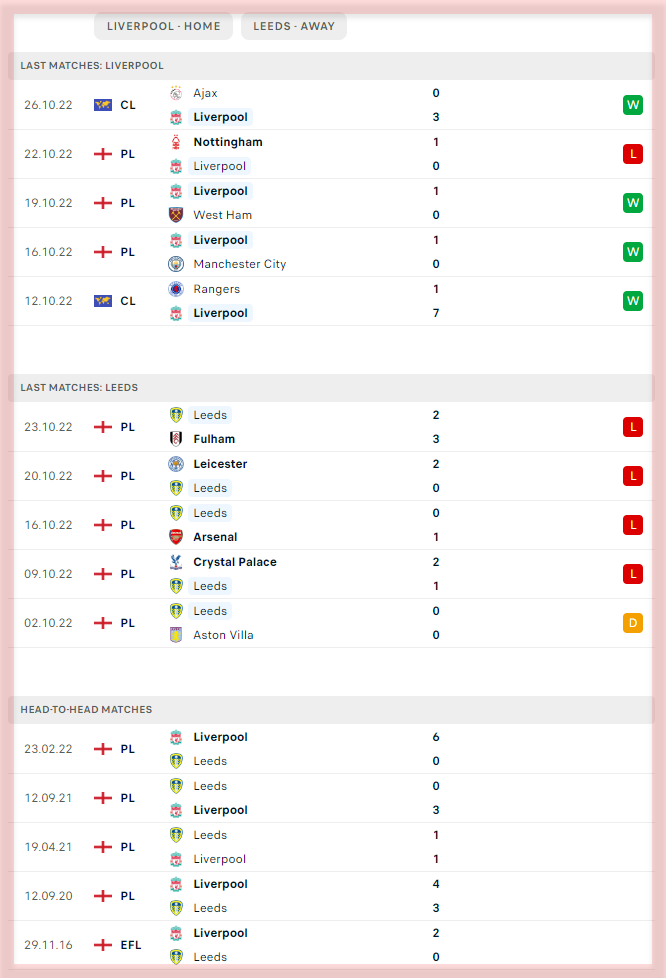