Lithuania vs Faroe Islands – Lithuania is unquestionably the worst team in the group and is ranked last in the standings with a 100% losing record. Faroe Islands, meanwhile, needs a draw in this forthcoming game to ensure that they will not be demoted at the conclusion of the season.

They now hold the third position in the rankings with four points to their name. Despite not being particularly good throughout the campaign, they managed to make their presence felt.

During this run of games, they also got some incredibly valuable experience, and they have high hopes for the forthcoming Nations League. It is crucial for them to maintain their position in League C as a result.

Meanwhile, Lithuania lost each and every game they played in the competition. In addition, they scored the fewest goals of any of the other clubs in the group while also conceding the fewest.

In actuality, they only scored one over the entire season while giving up twelve goals in return. In the Euro Qualifying games, they also had the worst group result. They also scored the fewest goals and conceded the fewest there.

They are obviously under a great deal of pressure, which will only make their chances in this forthcoming encounter worse. As things stand, anticipate the Faroe Islands to defeat the struggling Lithuania this Thursday.

The Islands prevailed 2-1 in the most recent game. In the previous three meetings, they had won two. Three goals or more were scored in four of the previous five matches. In five of the last seven meetings, both teams scored.

The Faroe Islands, on the other side, had gone two games without losing and were unbeatable in four of their previous six games. Notably, in two of their previous four road trips, they had scored two goals or more.

Given these findings, expect Faroe Islands to win this Thursday at the LFF stadionas. Expect goals to be plentiful as well, given the desperation of both teams. 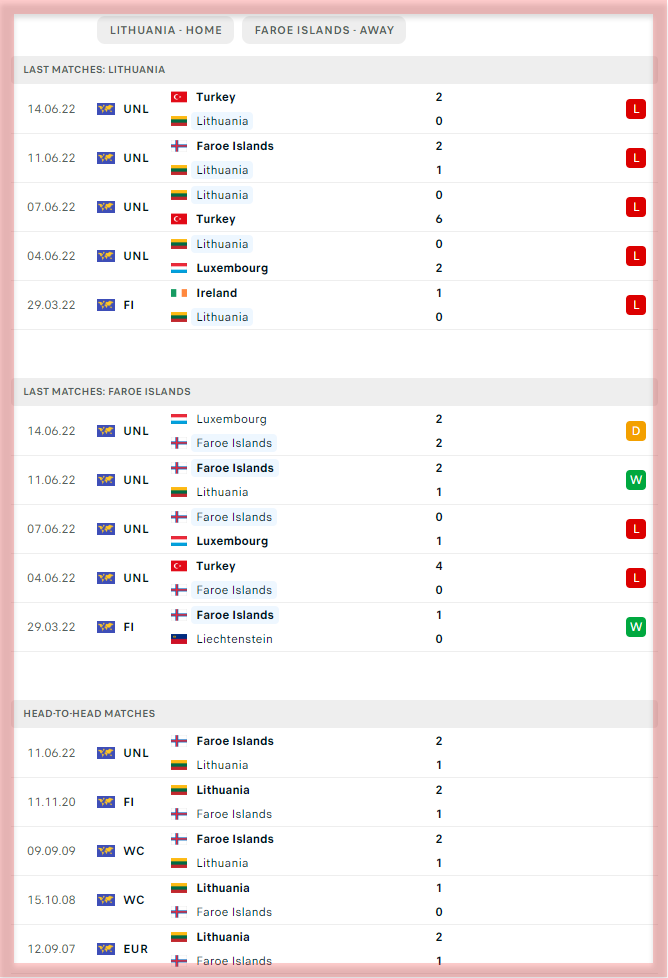