Lincoln vs Shkupi – Preview, and Prediction

Lincoln vs Shkupi – Lincoln Red Imps have won two of their last three Champions League qualifying first round matches, but they face a formidable challenge this time around.

Last Tuesday, the Gibraltar champions had a terrible trip to North Macedonia and lost the first leg by a score of 3-0.

Lincoln Red Imps’ 17-game winning streak in all competitions came to an end as a consequence of the first leg defeat, which was also their first competitive loss since December 2021.

Mick McElwee’s team will get motivation from the fact that they have won nine of their previous 10 home games as they prepare for a spectacular comeback on Tuesday.

They can draw strength from the fact that Lincoln Red Imps defeated Fola Esch 5-0 during the home leg of their first-round match in last year’s Champions.

Shkupi, meanwhile, might believe that the difficult part of the match has already been completed after hammering Lincoln Red Imps in the first leg to take the lead.

In the home leg, they had a two-goal advantage at the break thanks to goals from Mamadou Danfa and Sunday Adetunji.

The Gibraltar champions’ chances of winning were dashed by a Scott Wiseman own goal, notwithstanding Gagi Margvelashili’s fears that his dismissal for a second bookable offence gave Lincoln Red Imps an opportunity to stage a comeback.

Shkupi, who made their Champions League debut last week, will now get ready for their first away match in the league.

The North Macedonian champions have never lost a European away game by three goals or more, suggesting history is on their favour going into the second leg even if they haven’t played an away game in Europe’s premier club competition.

Lincoln Red Imps will have to take chances in order to overcome a three-goal deficit, but we believe Shkupi will win by a slim margin and advance to the second round of qualifying by taking advantage of any openings behind the home defence.

Over the course of their previous six games, Goce Sedloski’s Shkupi had a total of 7 successful goal attempts. There have been eight goals scored against them in all during that time. 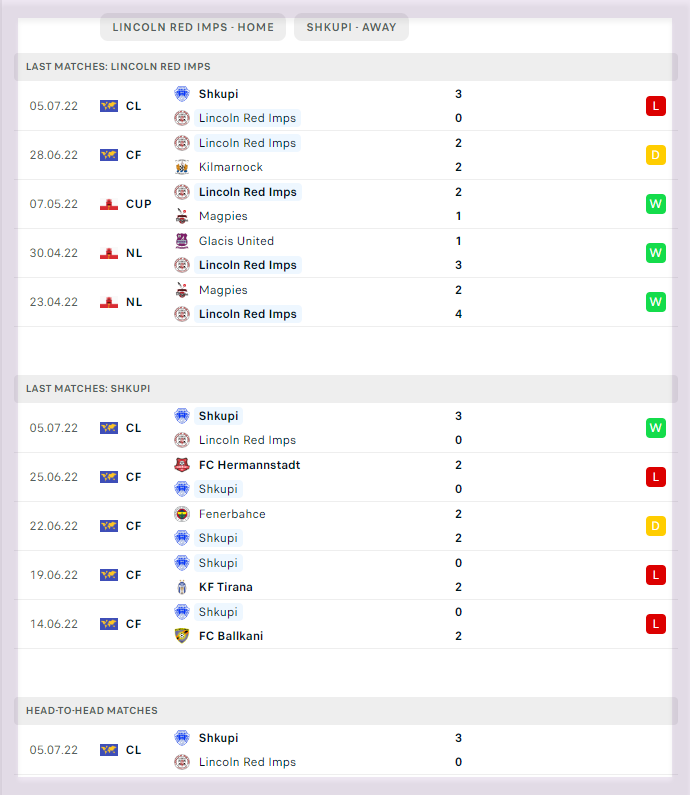