Lillestrom vs Sarpsborg – Preview, and Prediction

Lillestrom vs Sarpsborg – In Round 6 of the Eliteserien, Lillestrom will face Sarpsborg, who have won their last two league games. This Monday, these two teams will face off at rsen Stadion.

Lillestrom is in second place in the standings after six games, with 14 points. So far in the league, they have won four times and drawn twice.

In their last nine league games, the hosts have scored at least one goal, and they only need three more points to pass Viking for first place. They are the only team in the league that has not lost this season.

The hosts are unbeaten in all competitions this season, and they earned an outstanding point away at Bodo/Glimt on Sunday to keep their Eliteserien title hopes alive. They have also kept a clean sheet in their past four league home fixtures.

Sarpsborg, on the other hand, is in fourth place on the standings with ten points. They have lost and drawn once in the five matches they have played, while winning three times.

Sarpsborg has been a wonderful surprise package so far this season, but their away Eliteserien games have seen them allow an average of two goals.

Sarpsborg overcame Odd 1-0 at home, extending their unbeaten streak to four games since losing their first match against league leaders Viking. The visitors have won both of their away games so far, with a score of 2-3 in Kristiansund and a whopping 2-5 in Tromso.

Sarpsborg has won three of their past five league games against Lillestrom, and only one side scored in four of their last five meetings.  Sarpsborg won the previous league meeting 2-1.

Lillestrom hasn’t lost in any of their last nine Eliteserien games. They also won all three of their home games this season, keeping clean sheets in each and scoring seven goals in total.

They’ve scored at least once in each of their last nine league games. Meanwhile, Sarpsborg has won both of its away games this season and has gone undefeated in their past six league away games.

However, they remain winless against this home team after playing them away from home in the previous three league games. A tight encounter may be observed here, although avoiding the outcome entirely may be the best option. 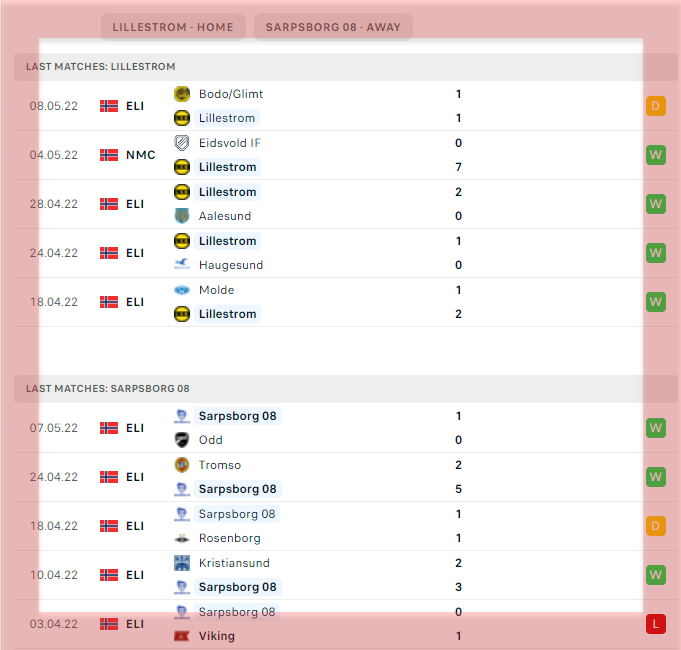