Levante vs Alaves – Preview, and Prediction

Levante vs Alaves – On Sunday, Alaves will go to the Estadio Ciudad de Valencia to face Levante, who are now in the relegation zone. With 31 points after 36 games, Alaves sits in 19th place in the standings. They only won eight games in the league, drawing seven times and losing 21 times. The hosts have a better chance of avoiding relegation this season, since they are now within striking distance of the safety line. However, they would need other outcomes to go their way, as well as victories in both of the remaining matches.

The hosts are coming off a 2-1 La Liga victory over Espanyol in their most recent match. Alaves have been outscored in five of their previous six games, allowing opponents to score nine goals in total. Levante, on the other hand, is at the bottom of the table, finishing in 20th place with just 29 points. In the league, they won only six times out of 36 games, drawing 11 times and losing 19 times. They’ve already been demoted to LaLiga 2, and they’ll be fighting for pride.

In their most recent league match, Levante were defeated 6-0 by Real Madrid. They have surrendered in each of their last six matches while also scoring in five of them.

Since their last six league meetings, Alaves have gone undefeated against this opponent. However, they have lost their last 14 league games away from home. They haven’t scored in five of their last ten away games. Meanwhile, Levante has conceded the most goals this season, with 73. They only won four of their 18 home games this season.

Given that both teams are in the relegation zone, we believe Levante can win here, as they did last week against Real Soceidad and still have that home spirit. Furthermore, the visitors have only won once on the road this season. 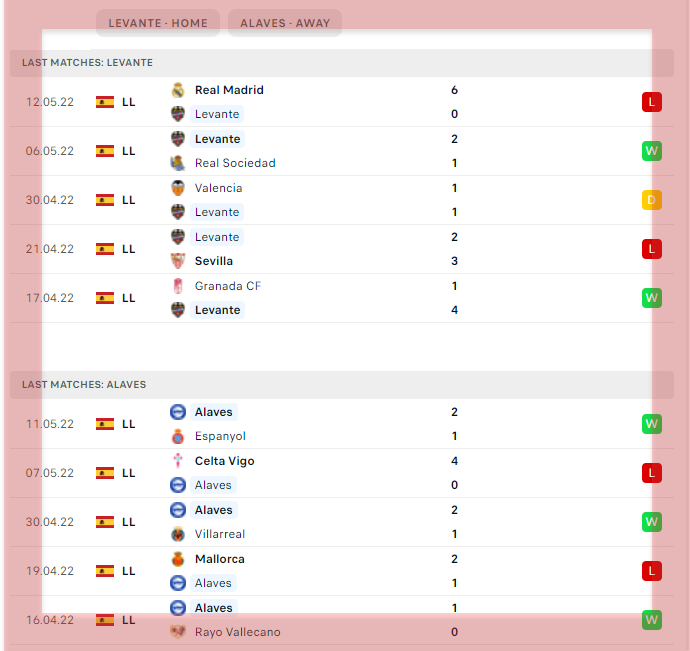