Lens vs Brest – Preview, and Prediction

Lens vs Brest -The previous season, Lens was one of the highest-performing clubs in the French premier division; nonetheless, they narrowly missed out on a European ticket.

Brest, on the other hand, was one of the clubs who had to settle for a mid-table position, and recently they have had a very patchy run of results.

Despite their best attempts, they are conceding a lot of goals and have struggled to maintain consistency. Furthermore, these problems have become much more concerning in their away games.

They have rarely been able to maintain clean sheets away from home, and they have also rarely prevailed in these kinds of games.

Lens, on the other hand, are currently on a winning streak and are scoring a tonne of goals. Additionally, they have been on a long winning streak in front of their home crowd, and they will be determined to capitalise on this.

They were one of only 6 clubs in the competition to score more than 60 goals the season before, and by just 4 points, they had missed out on a trip to Europe.

It appears that Lens will put on a strong performance at home this Sunday in order to earn the three points that are up for grabs.

Lenz has gone 14 games without losing, during which time they have also had separate 4-match, 3-fixture, and 2-game victory streaks.

Also keep in mind that they have gone on two distinct 3-match winning runs while enjoying a 10-fixture home unbeaten streak.

On the other side, Brest had lost their last three games and had failed to win in five of their previous eight games overall.

The most recent match had resulted in a 0-1 victory for Brest , In two of the previous four matches, both teams scored goals.

The 3 of the previous 4 meetings held here had three or more objectives. The previous four victories on this field have been evenly shared between the two teams, totaling 2.

They also had a losing run of three games and had gone winless on the road in 10 of their previous 13 visits. These data lead us to predict that Lens will win this Sunday. 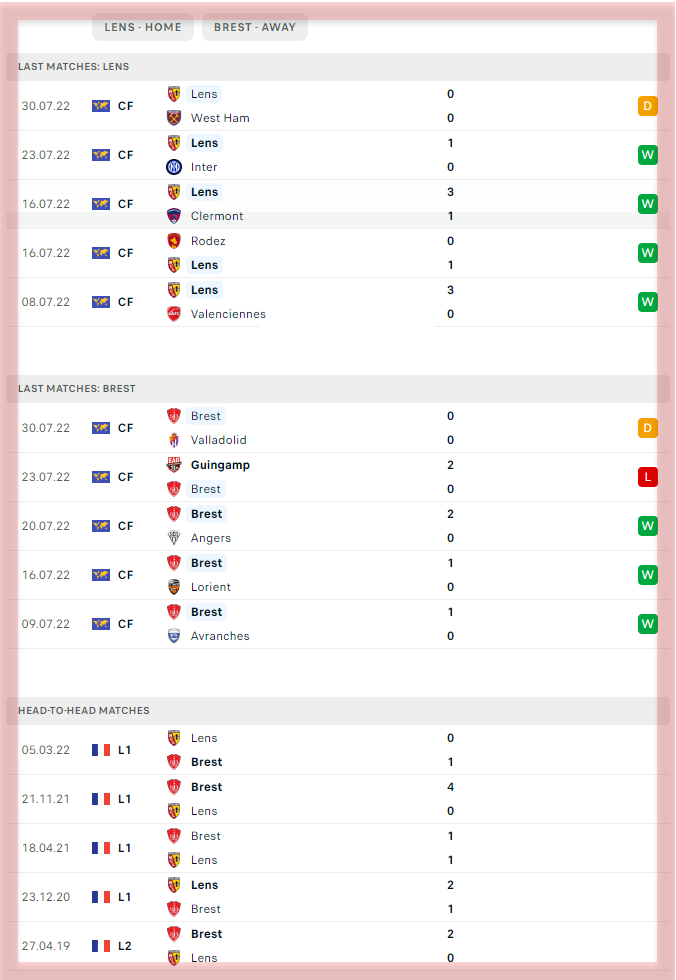