Leicester vs. Norwich- Preview, and Prediction

Leicester vs. Norwich- After two consecutive defeats, Leicester City will be desperate not to lose again when Norwich City visits the King Power Stadium on Wednesday. The Foxes were beaten 2-1 by Everton at the weekend, while the Canaries were thrashed 4-0 by West Ham United.

Leicester City are now officially consigned to a season without European play and are closer to the relegation zone than the top seven at this late point of the campaign. The European hangover harmed their prospects against a motivated Everton team. Vitaliy Mykolenko’s amazing goal and Mason Holgate’s header made things worse for the hosts.

Leicester are winless in seven games in all competitions and face a first Premier League defeat since Claude Puel’s final days. They are 14th in the standings and only eight points away from the drop zone, so anything can happen. Brendan Rodgers’ team will welcome games against relegated Norwich and Watford, but they have only taken two points from the previous 15 available in the Premier League and still have to face Chelsea before the season is over.

Rogers is anticipated to rotate again, and Norwich will go out with a whimper ,Unlike the Foxes, West Ham United responded perfectly by scoring four consecutive goals against woeful Norwich City at Carrow Road. It was a bad day at work for Dean Smith, whose side have now lost four in a row in the Premier League and are already planning their next promotion drive in the Championship. Although only one point ahead of Watford (who will join them in the second division), the Canaries must win their remaining games to save any semblance of honour.

On the other hand, Norwich have lost three of their previous four games, conceding 12 goals in the process, and have only beaten Brentford and Watford away from home. If Norwich concedes three goals or more at the King Power, they will set a new club record of 78 Premier League goals conceded. Rodgers’ team triumphed 2-1 at Carrow Road earlier this season and hopes to avoid a loss at home against the weakest team in the league.

This is a game that might give Leicester a major confidence boost. Norwich hasn’t been able to close the back door and hasn’t attacked much in recent weeks. Vardy’s return to the starting lineup will also be welcomed by King Power fans eager for their club to triumph. Their squad should easily secure a long-overdue triumph. 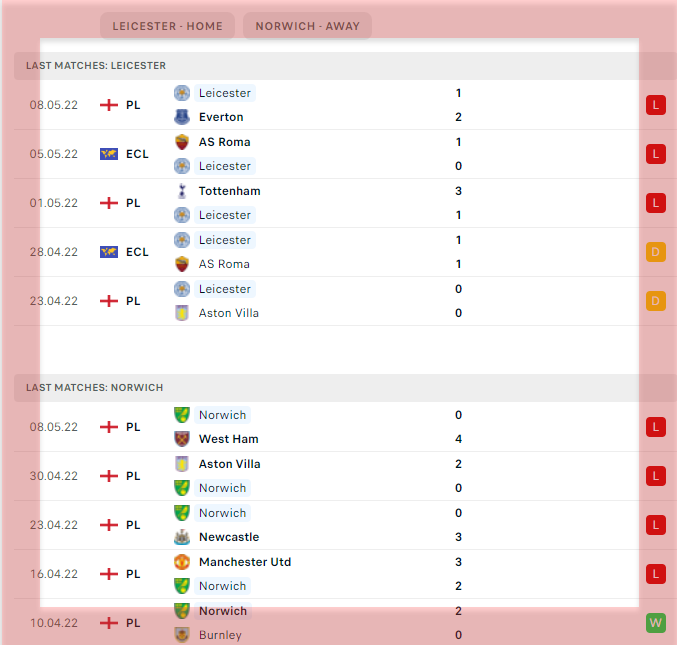