Leicester City vs Southampton – Southampton has been one of the league’s weakest teams this season, and it’s a marvel they haven’t been dragged into the relegation battle. They haven’t won in a long time, and the most of their games have been losses. They are conceding a lot of goals, and it should be noted that they have been a complete disaster on the road this season. The crew, on the other hand, appears to be in cruise mode now that they’ve ensured their own safety. All they need now is for the season to end. This is precisely what the Foxes require. They’re attempting everything they can to finish the season strong. The 2015-16 winners failed to live up to expectations and will not compete in any European events next season. This has been a season to forget, and the very least they could do for the fans is bring it to a respectful conclusion. They are playing at home on Sunday and will give it their all to get the three points. Expect a win for them this weekend based on their previous form and their head-to-head advantage over this opponent. Three or more goals have been scored in four of the last seven games. The most recent meeting ended in a 2-2 tie. The most recent match at this venue ended in a 1-0 victory for the hosts. The hosts have won their last two games at this venue.

The Foxes defeated Watford 1-5 on the road last Saturday. They are also on a two-game winning streak, during which they have scored a total of eight goals. It’s also worth noting that they were unbeaten in 16 of their last 18 home games, putting together a 4-game winning streak as well as a separate 5-match winning streak. Southampton, on the other hand, was defeated 1-2 by Liverpool at home last week. They are currently on a three-game losing run and have lost 11 of their last 12 games overall. They also have a dismal head-to-head record versus opponents, including a 9-0 thumping just three years ago. Expect Leicester to win this Sunday, based on the current situation. 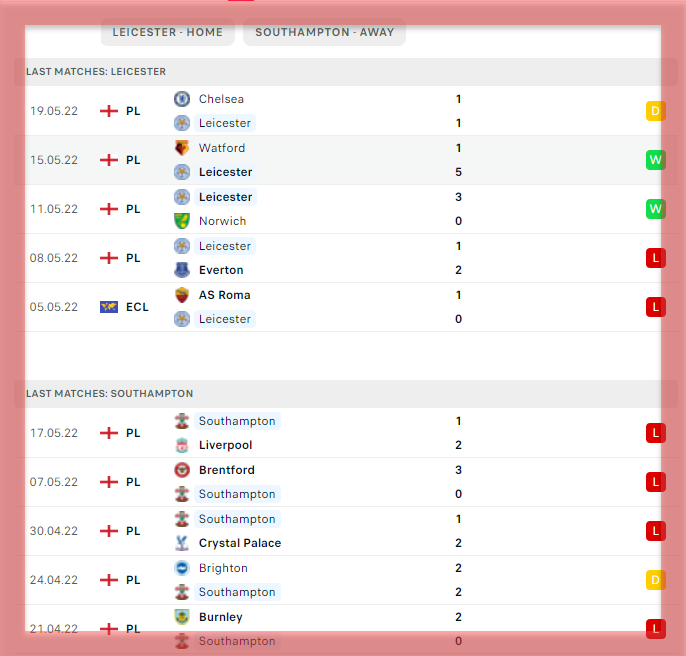