Leeds vs. Chelsea – Preview, and Prediction

Leeds vs. Chelsea – The relegation-threatened Leeds United visit Chelsea at Elland Road on Wednesday night. The Whites lost 2-1 to Arsenal following a disastrous first half, while Thomas Tuchel’s team drew 2-2 with Wolverhampton Wanderers.

Eddie Nketiah scored twice in the first ten minutes and Luke Ayling was sent off for a horrendous tackle on Gabriel Martinelli. Although Arsenal failed to exploit and even conceded to Diego Llorente’s header, there was no remarkable comeback for Leeds’ ten men.

With just three games left, Jesse Marsch’s quick start at Elland Road has come to an end after losses to Manchester City and Arsenal. Leeds are now in the relegation zone after Everton beat Leicester City, and games against Brighton & Hove Albion and Brentford are not going to be easy.

Leeds have gone 10 games without a clean sheet at Elland Road since beating Crystal Palace in November – the longest such skid since 1966 – but Chelsea are not proficient at keeping a lead. After converting a penalty and curling in a magnificent attempt from the edge of the box, Thomas Tuchel’s faith in Romelu Lukaku finally paid off against Wolves.

With new owner Todd Boehly in the grandstand, Chelsea capitulated in the dying moments, as Francisco Trincao equalised and Conor Coady scored to ignite frenzied celebrations in the away end. Chelsea are clinging to third place after defending their European crown and threatening an early title challenge, but Arsenal’s four-game winning streak has reduced the deficit to just one point.

As a result of the takeover news, Tuchel has now supervised a three-game winless streak in the Premier League and has seen his side lose 20 points from winning situations this season – not encouraging figures ahead of the FA Cup final against Liverpool. Chelsea had to fight hard for their 3-2 win over Leeds at Stamford Bridge in December, and the Whites haven’t beaten the Blues in nearly 20 years, but the Blues aren’t the mindset monsters they once were.

Leeds’ defensive crisis has worsened, and had Arsenal found a vicious streak at the Emirates, the Whites may have shipped four or five. As a result of Chelsea’s recent struggles, Marsch’s team will be hoping for a shock outcome, but Tuchel will be wanting a great performance ahead of the trip to Wembley. 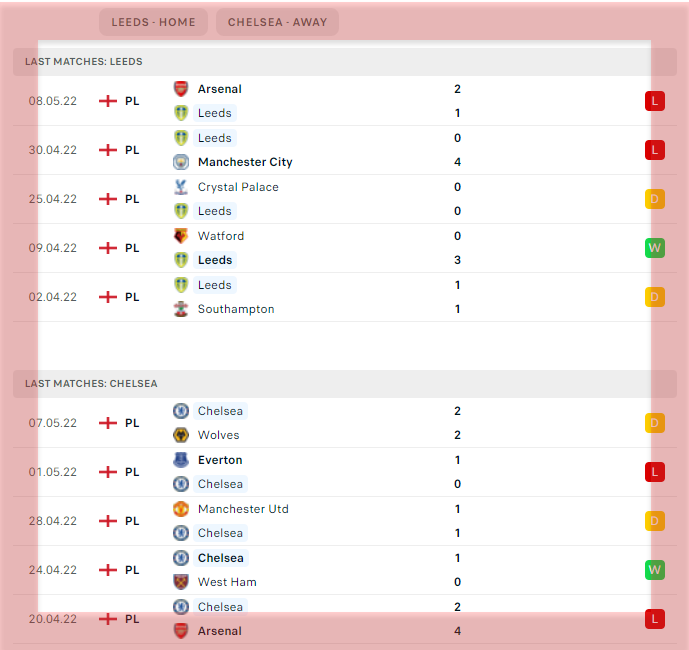