Leeds vs Bournemouth – Preview, and Prediction

Leeds vs Bournemouth – Leeds did the unthinkable as they defeated Liverpool by 2-1 last time. Now Jesse Marsch and his men will look to extend their winning run as they will welcome Bournemouth at Elland Road.

The host got an important victory over Liverpool, thus ending their four-game losing streak. In that 2-1 victory it was Crysencio Summerville who scored the winning goal in the 89th minute of the game. This is their third win of the season.

It is worth knowing that, the recent victory helped the team leave the relegation zone, On the other hand, Bournemouth conceded their third defeat in a row. This is happening for the first time since April 2021.

In the game against Tottenham, Gary O’Neil’s side lost by 3-2. It was Rodrigo Bentancur who scored the winner. Following this result, the team is in the fourteenth position on the league table.

The visitors have the worst defensive record this season next to Nottingham Forest. They are conceding 2.15 goals per game this season. Moreover, the last time the visitors celebrated a victory was on the 8th of October.

Gary O’Neil will be concerned about his team’s defensive form as they have now gone sixteen top-flight matches on the road without a clean sheet.

Both sides will be meeting after a period of seven years, The host have won all four head-to-head meetings at Elland Road since 1989, When both these teams last met in 2015 the game ended in a 1-0 victory for the current host.

The most important player for the Jesse Marsch is arguably Crysencio Summerville. He is on a two-game goal-scoring streak.

You can back the following as our first tip is that Leeds will win by 2-1 – at 9.00 odd. This is after considering that the host have an excellent winning record at Elland Road. Moreover, they defeated Liverpool most recently.

Our second tip for this game is that Crysencio Summerville to score in the second half – at 12.00 odd. He scored the winning goal against Liverpool in 89th minute, moreover against Fulham as well he scored in the 90+1st minute

Leeds vs Bournemouth – Head To Head 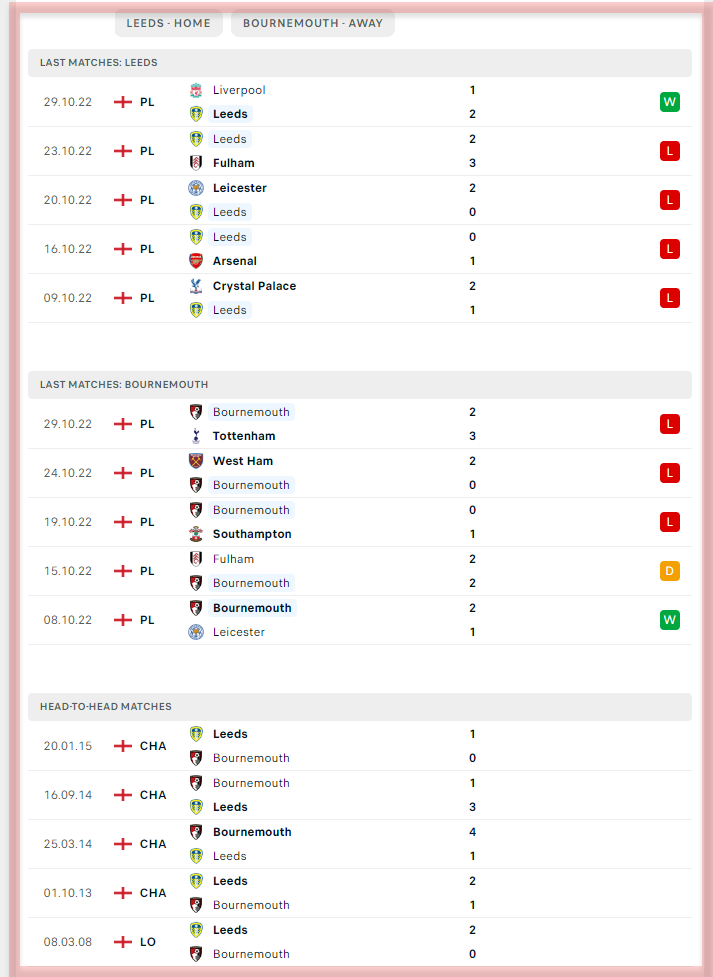