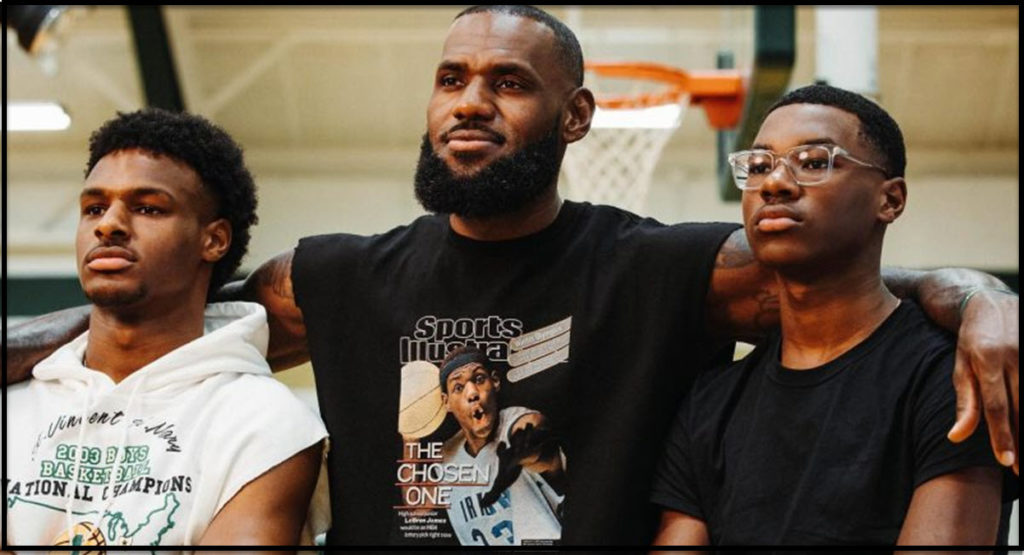 LeBron says they don’t talk about the future, he’s trying to manifest it.

LeBron James leaving the Lakers to play with his oldest son Bronny has been speculated about in the past, but it now seems more likely that LeBron has that as his plan than just a possibility.

Even though he doesn’t often talk to his kids about it, LeBron revealed in an interview with Sports Illustrated that he has his sights set on playing with his kids.

Bronny, Lebron, and Bryce During a Sports Illustrated photo shoot, James strikes a pose on the stands.
After a workout, LeBron, Bryce, and Bronny pose for a photo with LeBron’s trainer Mike Mancias. “I feel like I could play for quite a while,” Bronny said.

Therefore, everything depends on my body, but more importantly, my mind. The sky is the limit for me if my mind can remain focused, energetic, and fresh. I can do better than that. However, we’ll see.

The earliest that two-thirds of the James family can play together would be in 2024, when Bronny can enter the NBA draft after only one season of college and LeBron’s most recent contract extension includes an opt-out clause for that year.

We don’t even really discuss the future all that much, LeBron threw in.

During the AXE Euro Tour in France, Bronny and Bryce compete for the California Basketball Club.

LeBron’s statistics continue to demonstrate that, even at his advanced age, he is still capable of being among the league’s most effective players when healthy.
He averaged 30.3 points, 6.2 assists, and 8.2 rebounds per game last season while trying to single-handedly will a weak Lakers team into the playoffs.

Additionally, he played 37.2 minutes per game on average, which was a high mark for him since the 2016 campaign while he was still in Cleveland.

LeBron will likely need to play a lot of minutes this season if the Lakers are to have any chance of making the playoffs, let alone contending for a championship, but it appears likely that his playing time will decrease over the course of the following few seasons.

LeBron would be better served by gradually reducing his playing time if he wanted to keep his body healthy and eventually play alongside both of his sons.