Latvia vs Andorra – Preview, and Prediction

Latvia vs Andorra – Minnows from Europe Andorra will face Latvia at the Daugavas Stadiona on Friday evening in the first match of the UEFA Nations League 2022-23. The two teams will once again compete in League D, the lowest rung in the competition, in the hopes of achieving an unlikely promotion against the odds.

In September 2020, Latvia and Andorra played out a goalless draw to begin their 2020-21 Nations League season.That was the first of three stalemates for Dainis Kazakevics’s team in the competition, which was eventually broken when Malta won in the 97th minute of the fourth game. The 11 vilki won their only game of the season with a 5-0 hammering of Andorra in the return match, but it wasn’t enough to get them promoted to League C, as they finished five points behind the Faroe Islands. While only losing one game was a good, they will need to find a method to win more games this season instead of settling for a share of the spoils.

If there is one thing that is certain, it is that Latvia has a lot of work ahead of them if they are to reclaim their past glory of almost qualifying for the 2010 World Cup. While Kazakevics and his teammates may be dissatisfied with their single victory last season, it was still one more than Andorra.

Europe’s perennial underdogs failed once more, managing only two points and a single goal. Els Tricolors’ triumph over San Marino last year, which was aided by a brace from centre-back Marc Vales, was only their fourth competitive victory since their international debut in 1996. Koldo Alvarez, who has been in charge for 12 of those 26 years, will be sure to remind his players of the surprises they’ve pulled off in the past, like as their surprise win against Hungary during World Cup qualification.

Andorra will undoubtedly require a few more performances like that if they are to be promoted to League C next season, but they come into this game having won their two friendlies in 2022, against Grenada and Saint Kitts and Nevis. The draw experts from last season face a team that hasn’t been involved in a deadlock in nine games. We expect that streak to continue, as Latvia should easily dispatch their underdog opponents, although they might certainly score with the confidence gained from their two previous friendly victories. 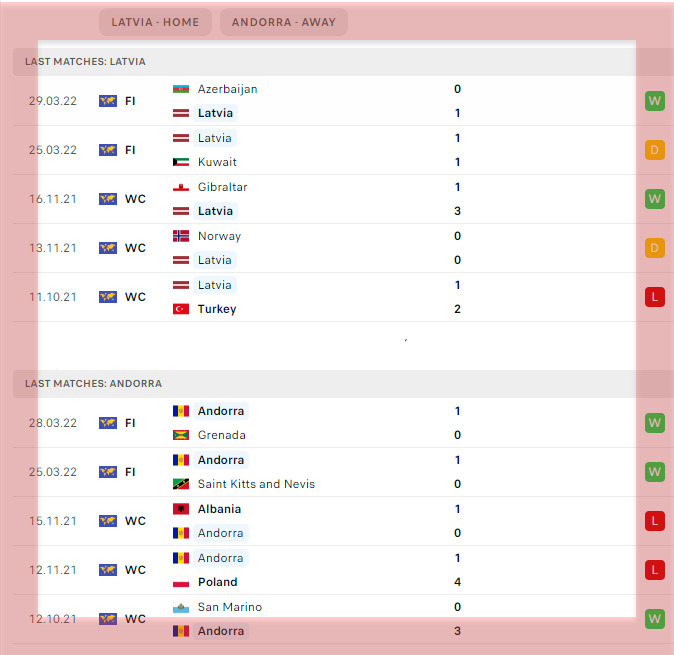