La Fiorita vs FC Ballkani – After losing to Inter Club d’Escaldes 1-2 in their previous match in the UCL Qualifiers, La Fiorita will be looking to rebound today. Danilo Rinaldi was the lone scorer for La Fiorita (45′).

La Fiorita’s attacking numbers in more recent games haven’t exactly been stellar. Throughout their last six games, they have only scored 3 goals against other teams. La Fiorita has also seen that eight goals have been scored against them during those meetings.

Ballkani and their visiting supporters will be hoping for a better outcome after suffering defeat to algiris Vilnius in their previous match in the UCL Qualifiers competition. Algiris Vilnius ultimately prevailed in extra time to decide the game.

Due to a totally healthy team that is prepared for this match, La Fiorita manager Luciano Mularoni will be happy not to have any fitness concerns to talk about before this match.

The Ballkani manager has an entirely healthy team to pick from, so he enters this game without any health worries.

Ballkani appear to be on track to score twice in this match against La Fiorita, and La Fiorita may find it challenging to penetrate their defence. As a result, we anticipate Ballkani to have a very comfortable 0–2 lead at the end of the game. 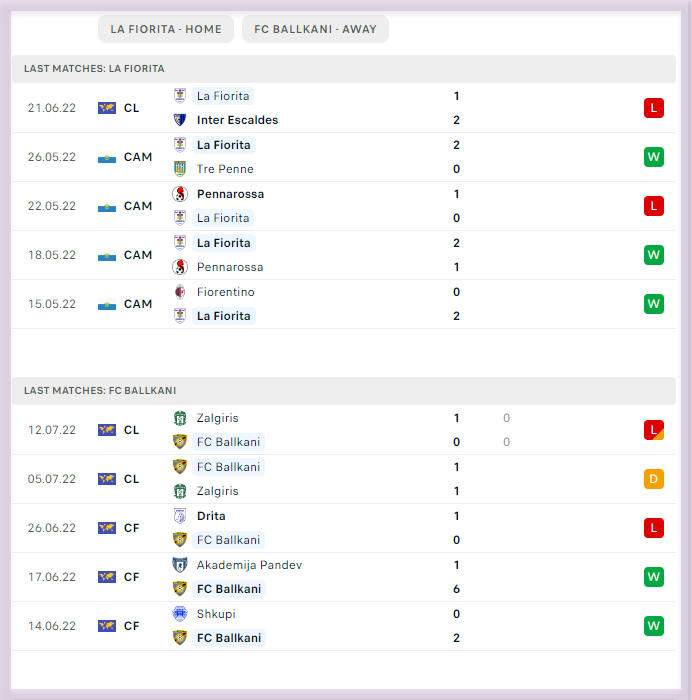