Konyaspor vs Hatayspor – Preview, and Prediction

Konyaspor vs Hatayspor – Konyaspor’s recent victories have been erratic. When the team’s form declines and they lose a game, they may be on a winning run. However, their consistent performance in recent games has earned them a spot in the top half of the league table. Their present position allows them to compete in the Europa Conference League playoffs as well. The squad is currently in third place in the league rankings, with 64 points.

Konyaspor’s most recent encounter was against Antalyaspor. Antalyaspor scored three goals in the encounter, while Konyaspor only managed two, resulting in a 3-2 FT loss for Konyaspor. Hatayspor’s recent matches suggest that the team is having some difficulties with their current form. In the last seven matches, the team has failed to win. This season, the squad has 14 victories, 8 draws, and 14 losses to their credit. With 50 points from their matches, the squad is presently ranked twelfth in the league.

Hatayspor’s most recent encounter was against Trabzonspor. Hatay was able to square the score with a last-minute goal, resulting in a 1-1 FT score.

Hatayspor has been struggling in recent encounters. When they play against Konyaspor in the fixtures, their glitch could be a disadvantage. Konyaspor has lost their last two matches in a row and will look to end that streak in their next fixture.

Konyaspor’s three-match winning streak came to a stop with their loss in their most recent home match. In these games, the side had also scored above 1.5 goals. In away encounters, Hatayspor has not had the success they had hoped for. They haven’t won in their last eight games, with six of them ending in defeat. I believe Konyaspor will win the match since they are the best team of the two. We may also anticipate Konyaspor scoring over 1.5 goals in each encounter. 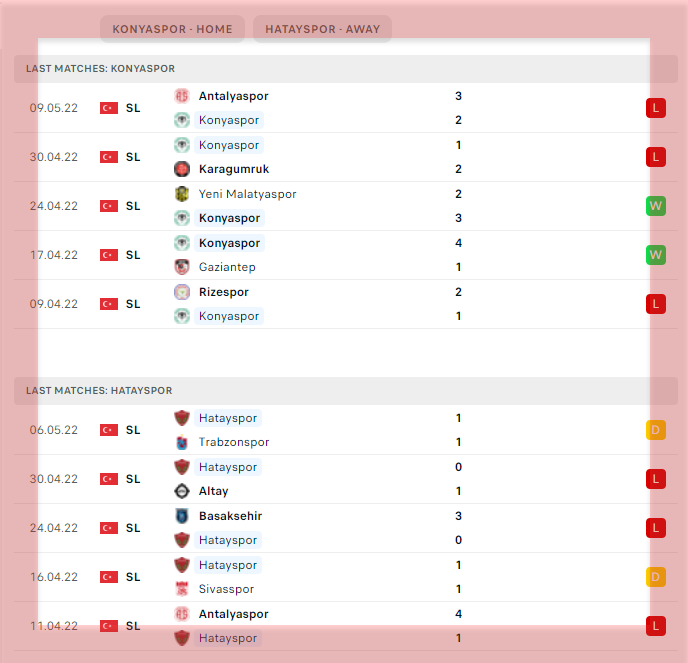