Kayserispor vs Yeni Malatyaspor- Kayserispor’s last game was against Trabzonspor. The game was close, and both teams scored in the last few minutes. Kayserispor scored two goals that gave their team a much-needed lead and helped them win. The game ended with a score of 4–2 FT.

Yeni Malatyaspor hasn’t done well in any of their games this season. The team has lost in more games than they have won or drawn. Their bad play has put them in last place, and they have no chance of getting out of the relegation zone. With only two games left, the team is sure to finish at the very bottom of the Super Lig table.

Rizespor was the team that Yeni Malatyaspor played in their last game. Rizespor scored three goals in the game, while Yeni could only score one. The score of the game was 1-3 FT.

Both teams can’t move up in the league table because they only have two games. The way Kayserispor is doing now guarantees that the team will be in the Super Lig again next season. Yeni Malatyaspor has lost their last eight games in a row, so they are sure to be moved down to a lower league next season.

The better team is Kayserispor, and it has a better chance of winning than Yeni Malatyaspor. Both teams have scored in most of their recent games, so it’s likely that they will do so again in this one. 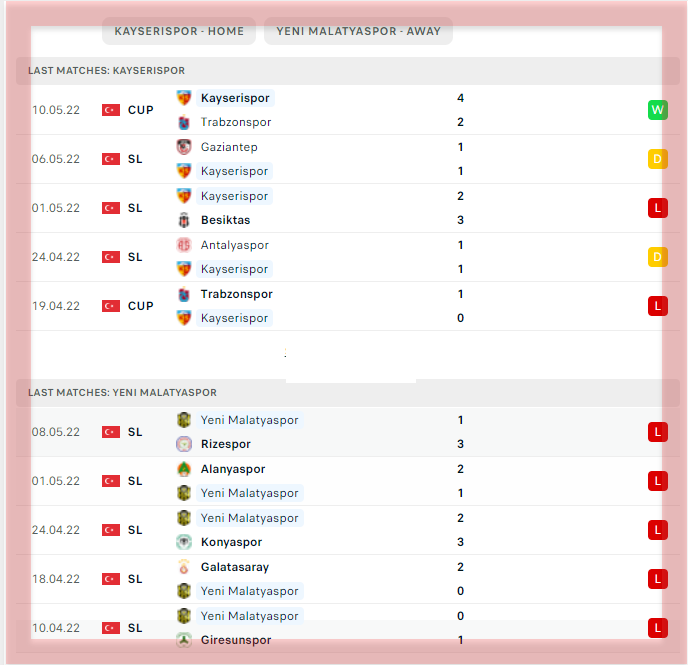