Kasimpasa vs Antalyaspor – Preview, and Prediction

Kasimpasa vs Antalyaspor – Kasimpasa’s recent matches demonstrate that the team has progressed. Seven of the team’s previous ten matches have ended in victories, with the remaining three ending in defeats. Their performance has helped them climb the table to tenth place with 50 points from their first four games. However, with only two games remaining, the squad has little chance of qualifying for the Conference League playoffs.

After their last encounter against Sivasspor, Kasimpasa added another victory to their tally. Kasimpasa seized the advantage in the first half of the match and maintained it throughout the evening. Sivasspor managed only one goal, and it came in the 90th minute, resulting in a 1-3 FT score.

Antalyaspor’s most recent matches resulted in a mixed bag of outcomes. The team had been in excellent form since March, but it couldn’t maintain it for long. The club has two wins, two ties, and one loss in its previous five games. Antalyaspor is currently in seventh place in the league rankings with 55 points. They have also secured a spot in Super Lig for the following season.

Antalyaspor’s last match was against Konyaspor. Antalyaspor scored three goals in the encounter, while Konyaspor only managed two, resulting in a 3-2 Antalyaspor victory.

Kasimpasa has been in excellent form recently, winning seven of their past ten games. Antalyaspor, on the other hand, has seen its form deteriorate over time, with varied outcomes.

Kasimpasa’s loss to Istanbul in their most recent home match stopped a three-match winning streak. Their recent home encounters have also yielded positive outcomes for the team. Antalyaspor has been impressive on the road recently, going undefeated in their past four games. They’ve also scored over 1.5 goals in their last three games.

We may predict the match to end with over 2.5 goals because both teams have scored over 1.5 goals in their previous matchups. Kasimpasa is the better team of the two and has a higher chance of winning. 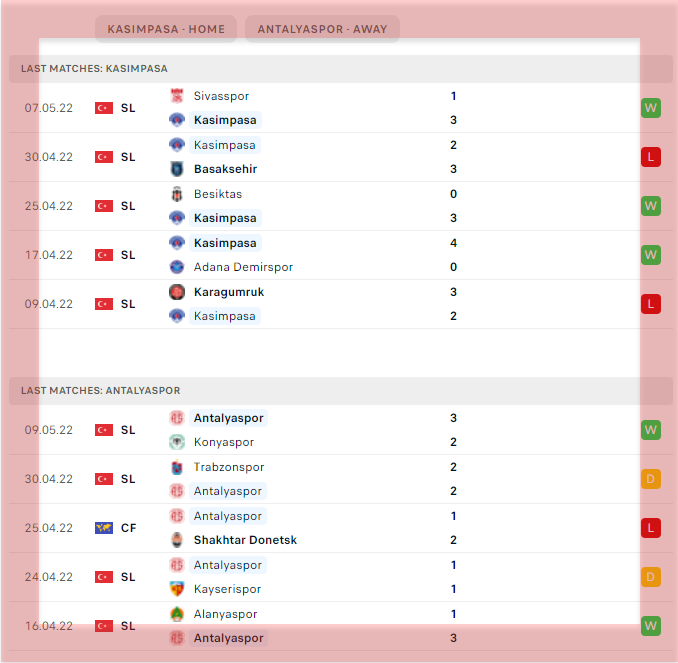