Juventus vs PSG – Preview, and Predictions

Juventus vs PSG – After Manchester City, of course, the Parisians may be considered the best team in Europe right now. There can be no denying, though, that their formidable front three is now playing well together, and they will be the favourites to defeat Juventus on Wednesday.

Just look at the mess the Old Lady is in. They aren’t even in the running for the Serie A championship, and this season’s performance in Europe has been below average.

They are now tied for last position in the table with Maccabi Haifa, who are currently dead last. They have only been successful in winning once throughout the entire season, and there are no points for guessing who Maccabi was the opponent.

Additionally, the past Italian champions have a 100% losing record outside of that one victory. The Italians won their next match against the same opponent after overcoming Haifa at home.

The Italians also scored the fewest goals and gave up the most goals in the group, excluding the club that finished last.

The Parisians, meantime, are utterly unrelaxing. They scored the most goals and gave up the fewest goals in the group. They defeated their opponent by seven goals just the day before, with all three members of their front trio scoring.

Furthermore, the French champions won the reverse match as well. Expect PSG, who is currently on a winning streak, to defeat Juventus this Wednesday.

The most recent game saw PSG prevail 2-1, and both sides scored in each of the previous four matches.
Three or more goals were set for the last four encounters. The home team has not won all of their games at this venue.

Juventus recently lost in the CL after giving up four goals, and their defence has been a problem all year. They are also already out of the running for a spot in the Round of 16, thus the best they can hope for is a third-place finish.

The Parisians, on the other hand, are vying for first place. They are in excellent shape, and they triumphed over this opponent in the opposite contest. It should be recalled that Christophe Galtier’s team last suffered a defeat to Monaco back in March.

The way things are going, PSG should win on Wednesday. Additionally, there is a good likelihood that many goals will be scored because both teams will be striving for victory. 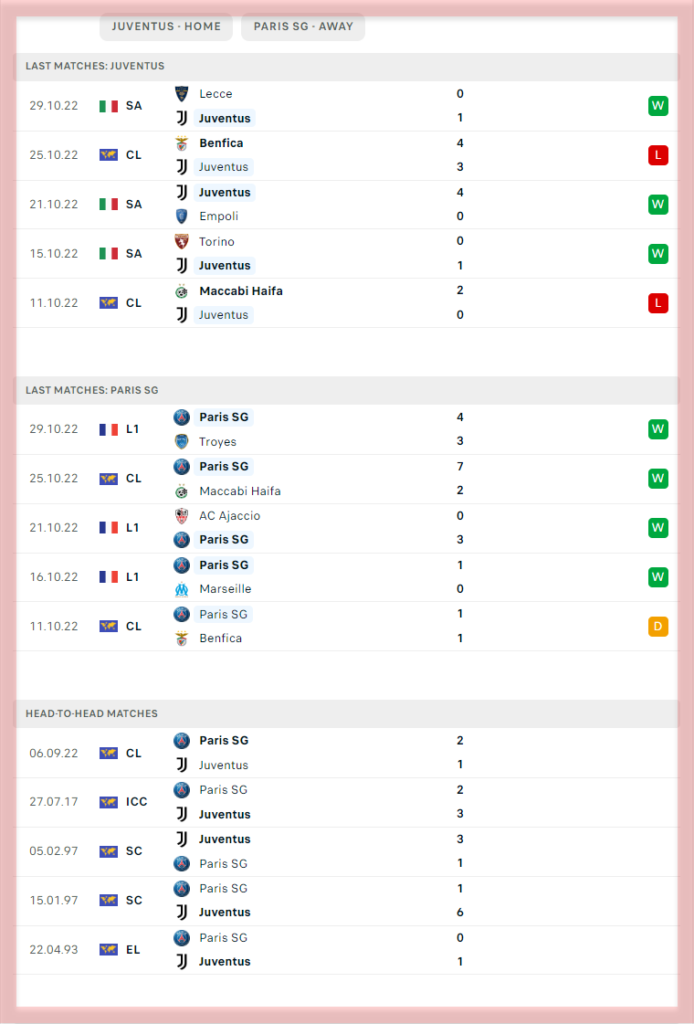