Juventus vs Lazio – Preview, and Prediction

Juventus vs Lazio – The Old Lady has ensured a place in the top four. This might be a significant decrease in level for a squad that enjoyed a nine-year winning streak. However, in the previous two years, the level of competitiveness in Italy’s top flight has improved dramatically.

Former champions will be grateful to their stars for getting them to the next round of the Champions League. Because the squad’s ability to represent Italy in Europe’s premier competition was questioned at one point during the campaign.

Meanwhile, Lazio sit in fifth place in the table, with no mathematical prospect of finishing in the top four. All that remains for them now is to maintain their current position in order to reach the Europa.

Three teams right below them, though, are only three points behind them and are all keen to significantly improve their respective positions in the closing stretch of the season. Lazio may find themselves in the Conference League if they are not careful.

The team has to win, and their desire could work against them. Both teams are likely to score at least once, however keep in mind that the Old Lady has the advantage.

The Old Lady lost 2-1 to Genova on the road previous matchday, but it should be noted that they were on a three-game winning streak before that.

Furthermore, they have only lost twice at this venue since September, both against Inter in Serie A and Villarreal in the Champions League.

Lazio, on the other hand, defeated Sampdoria 2-0 at home last week and is currently on a two-match winning streak. They had also scored a total of 6 goals during the process.

It’s also worth noting that they had won three of their previous four road trips and were unbeaten in seven of their previous nine total games. With these numbers in mind, it’s likely that goals will come from both ends of the field on Monday.

Lazio, on the other hand, is under a lot of strain, and Juventus, who have already qualified for the Champions League, can take advantage of that desperation at home. You can probably bank on them to score three points.

Throughout the season, the Old Lady has only lost four occasions at home. In the meantime, Lazio has only lost once on the road in the last four months. 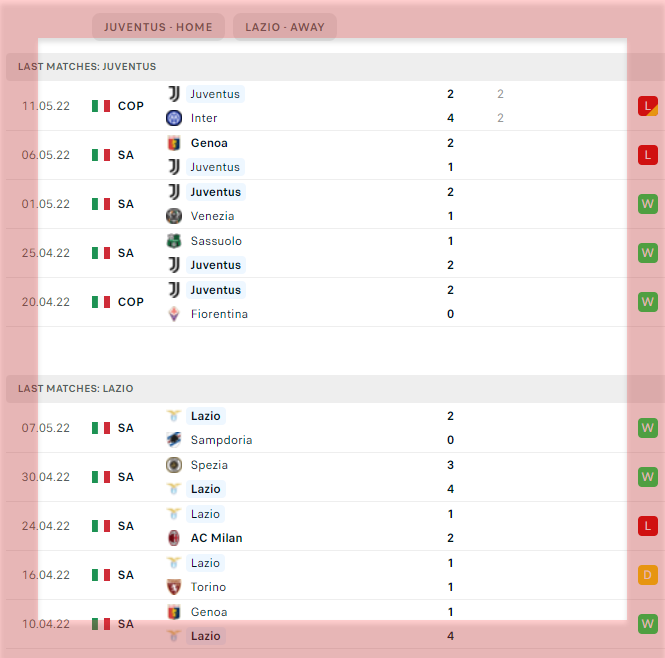