Junior vs Oriente- Preview and Prediction

Junior vs Oriente- The Colombian team has nothing to worry about going into the fifth matchday, since all the predictions are in their favor. This is more because of how bad the oil team did than because of how good Junior is. So far, Bolivia hasn’t gotten its first point, and it looks like that won’t happen today either.

In the last head-to-head match, Junior scored three goals. We think there will be the same number of goals or even more this time. But we think that both teams will score, making for an exciting game with lots of goals.

In their first three cup games, Oriente Petrolero hasn’t had many chances to score. They’ve only scored two goals so far. Also, they haven’t scored away from home yet, so we think they won’t be able to this time.

With a 4-0 win over Envigado on Sunday, Junior de Barranquilla showed their leadership on the field by advancing to the next round of the Colombian league.

Now, they will play a team they already beat three weeks ago and have the chance to move on to the next round of the Copa Sudamericana. Junior has been on a winning streak since that match in Barranquilla, and they hope to keep it going at home.

With three losses in the first half of the group stage, Oriente Petrolero’s chances of making it to the quarter-finals are almost over. They haven’t done anything to change the way their opponents play, and they have shown that they are the weakest team in the group.
They are in fourth place in the Bolivian league and haven’t lost any of their last four games. Last weekend, the Bolivians beat Atletico Palmaflor 2-1, which was a great win.

Junior vs Oriente- Head To Head 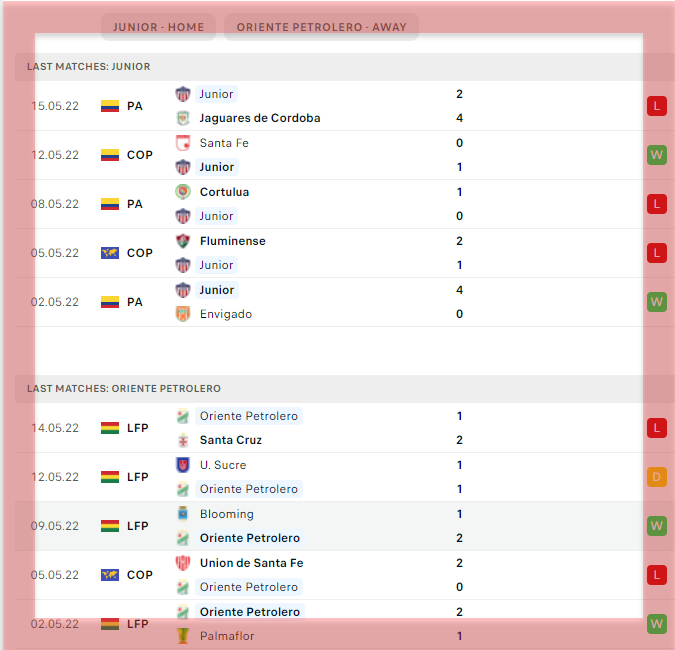