Jong FC Utrecht vs Almere City – Almere City is in last place after suffering their eighth defeat in the previous match. They are tied for the most draws in the league with Helmond, who are at the bottom. Jong Utrecht has lost back-to-back league matches and is a league team with a lot of inconsistency. They have lost seven of their previous nine league games while winning two. Jong Utrecht will host the visitors at Sportcomplex Zoudenbalch for the upcoming 29th Round of Eerste Divisie, with 5 points and 4 places separating them.

With only 23 points from 28 games, the visitors are in 19th place in the standings. In the league, they only won five times, drew eight times, and lost 15 times. They scored 39 goals while conceding 57, the second-worst total in the Eerste Divisie.

Almere City was defeated 0-1 by Venlo in their most recent match. Alex Pastoor’s team has bottled up five times in their past six games, resulting in 0.83 goals per game average. Utrecht Reserves, on the other hand, is in 14th place on the table with only 28 points. They won eight games out of the 28 they played, drew four times, and lost 16 times.

The previous week, the hosts lost for the second time in a row, 1-4, to Oss. Jong Utrecht hasn’t been known for their defensive prowess in recent years. They’ve let in 13 goals in five of their last six games after failing to keep opponents from scoring.

The hosts have lost their last three league games against Almere City. We also expect the visitors to win, considering Jong Utrecht has lost 71% of their home games this season, while the visitors have been decent on the road. 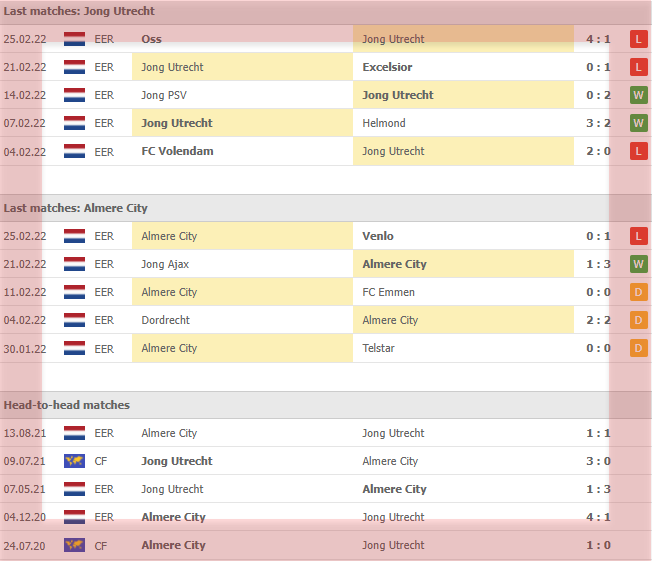