Jong AZ Alkmaar vs Telstar – Jong AZ Alkmaar is now in a dismal position, having lost their last five games in a row. Their last victory in the league came after a streak of 13 games without a win. Telstar hasn’t won in the last three league games but has won twice in the last five league games. The White Lions will travel to AFAS Trainingscomplex on Monday with a game in hand to take advantage of the hosts, who have been under the relentless pressure of late.

With only 28 points from 26 games, the White Lions sit in 13th place in the standings. They only won six games in the league, drawing ten and losing ten. They scored 28 points while allowing 47, demonstrating a far from the perfect defense.

Telstar had previously drawn 2-2 with Helmond Sport in an Eerste Divisie match. Andries Jonker’s team has scored six goals in their last six games, giving them an average of one goal per game. AZ Reserves, on the other hand, are in 17th place on the standings with only 25 points. They won seven of the 27 games they played, drew four, and lost 16 of the others.

Last week, Jong AZ suffered their sixth consecutive defeat to Eindhoven. They’ve been outscored in five of their last six games, allowing 10 goals in the process. We believe the visiting team will win today, given the home team has lost two games in a row at AFAS Trainingscomplex. Telstar is also undefeated against this opponent in all previous head-to-head meetings, as well as in their last two road games. 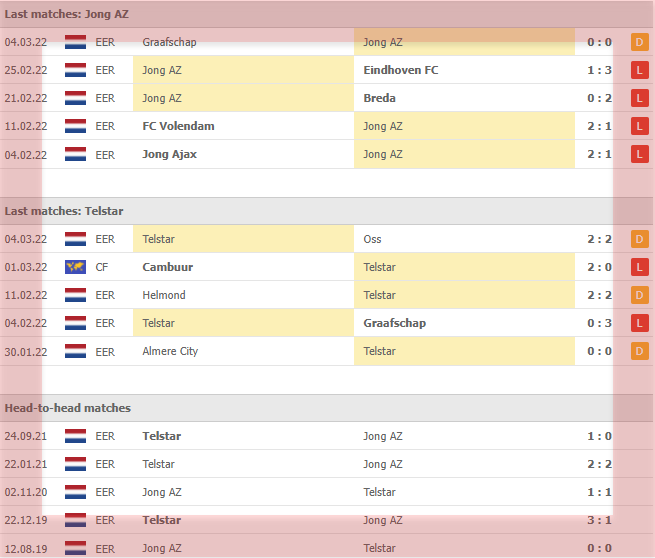 Our Prediction: Under 3.5 Goals FT