Jamaica vs Honduras – preview and prediction

Jamaica vs Honduras – These two clubs are among the absolute poorest in the CONCACAF Qualifiers’ Third Round, and they have already been eliminated from the competition.

They’re only here to finish the schedule, and this is their final matchday. After this match, the teams will be finished.

Both teams have struggled with defense throughout the season, allowing a large number of goals.

Honduras sits at the bottom of the table, having not won a single match thus far. It’s also no surprise that they’ve given up the most and scored the least.

Despite their problems, the Jamaicans will want to take advantage of this opportunity. They’re at home, and the players and management will want to finish the season on a high note in front of their home fans. It would also be a way of apologizing to their devoted followers who have supported them through thick and thin.

They’ve been in better shape recently, and, more significantly, they’ve had a stronger head-to-head record over the years. Expect a Jamaican victory tomorrow, based on the current situation.

The last matchday, Jamaica was defeated 4-0 on the road. They had drawn 1-1 the night before, and had also gone undefeated in three of their previous five home games.

Honduras, on the other hand, was defeated 0-1 at home by Mexico last week. They’d also lost nine of their previous ten games overall, and they’d gone 16 games without a win.

To top it off, they have a dreadful head-to-head record versus this competitor throughout the years.

Honduras is the only team that has not won a game in the Third Round.

In reality, with the exception of four draws, they have a perfect losing record.

Meanwhile, the Jamaicans had gone undefeated in three of their previous five Qualifiers appearances at home. And one of these two defeats had come at the hands of Mexico. 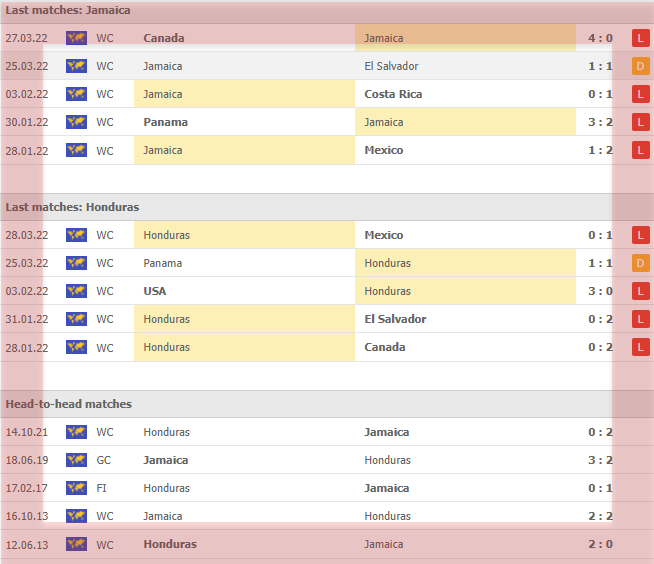