Istanbul Basaksehir vs Kasimpasa – At Basaksehir Fatih Terim Stadium on Monday in the afternoon, Basaksehir will play host to Kasimpasa to open the new Super Lig season.

The start of the 2022–23 Super Lig season coincides with the hosts’ UEFA Europa Conference League qualification phase. They had a difficult journey to Iceland, where they played Breidablik on Thursday in the third qualifying round.

Even though this is the first Matchday, head coach Emre Belozoglu should not be surprised to make any substitutions given that the rematch against the Icelandic opponents is set for this Thursday.

It is important to note that Israeli team Netanya was earlier defeated by Baskasehir in the European competition. The Turkish team won 0-1 in the second leg in Israel, advancing 2-1 overall as a result.

Only their first competitive game of the year will be played here by Kasimpasa. At the conclusion of the prior Super Liga season, they placed eleventh.

Only one of the five preseason exhibition games was won by Sami Ugurlu’s team. The thread includes a 1-1 draw with lower-division Pendikspor in their final preseason test last Saturday and a 2-1 loss to Galatasaray.

With a 31-28 goal differential from 19 league away games last season, Kasimpasa were fairly effective on the road. Considering that the hosts had a game against Iceland on Thursday, we do not anticipate them to park the bus here against Istanbul Basaksehir.

In four of the previous five head-to-head contests between these two rivals, the Over 2.5 goals FT & Both Teams To Score wager was successful.

In nine of the last ten matches between Basaksehir and Kasimpasa, the Turkish team has scored two goals or more.

We have to support an open contest here based on the clubs’ recent head-to-head record, despite the fact that Istanbul Basaksehir has been incredibly difficult to break down in the preseason and in their European qualifiers thus far this summer.

Our primary betting option is the Over 2.5 goals FT with odds of 1.85, but you can also attempt Kasimpasa to score two or more goals on Monday at odds of 3.40. 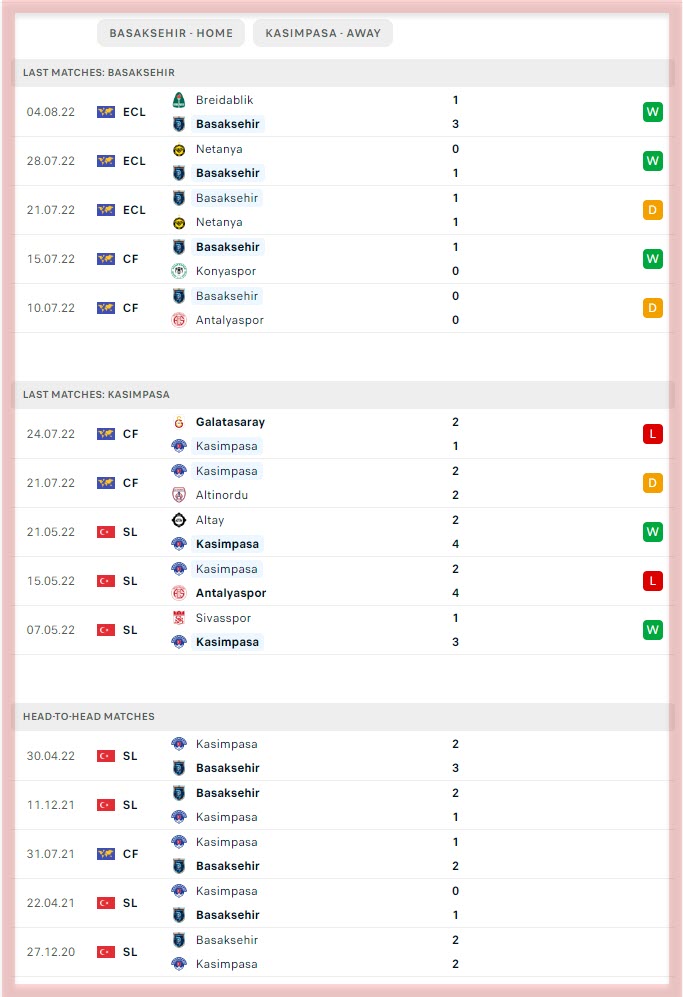