Inter Turku vs Lahti – Inter Turku will host Lahti in Veikkausliiga Gameweek 12 on Wednesday. The two teams are separated by six points and four positions. At Veritas Stadion, these two teams will go head-to-head.

After 11 games, Inter Turku has accrued 15 points, which places them fifth in the league standings. In total, they won and lost four times each, while they drew three times.

Their defense has been inconsistent, conceding goals in nine of their previous ten games, but their offense has scored in eight of those games, which is encouraging.

In the wake of a 1-1 league stalemate with SJK, the hosts are ready for this match. However, despite their recent struggles in goalkeeping, they have found methods to score goals of their own. Inter Turku has been penalized defensively six times in their last six outings.

For its part, Lahti is the farthest away from the pack, sitting in third place with just nine points. Of the 11 games so far, they have won twice, drawn three times, and lost six times. A win would lift them out of the relegation zone, but they are coming off a five-game losing streak.

Lahti returns for this round of the Veikkausliiga with a sour taste in its mouth after losing 3-2 to Ilves on the road. They’ve scored eight goals in their last six games, indicating their offensive threat recently.

Lahti has beaten Inter Turku twice in their last five games against each other, while Turku has triumphed twice. Both teams have scored in three of their last four encounters.

At Veritas Stadion, their last meeting finished in a 1-1 draw. A six-game unbeaten streak across several competitions awaits Inter Turku in this match.

Additionally, they have not lost in their last two league home meetings.  Adding to that, they have a four-game home h2h unbeaten streak versus this opponent.

Meanwhile, Lahti have lost all four of their league games against this opponent away from home. They haven’t won either of their last three league games on the road. We believe that the home team will win this Wednesday’s game based on their recent h2h records. 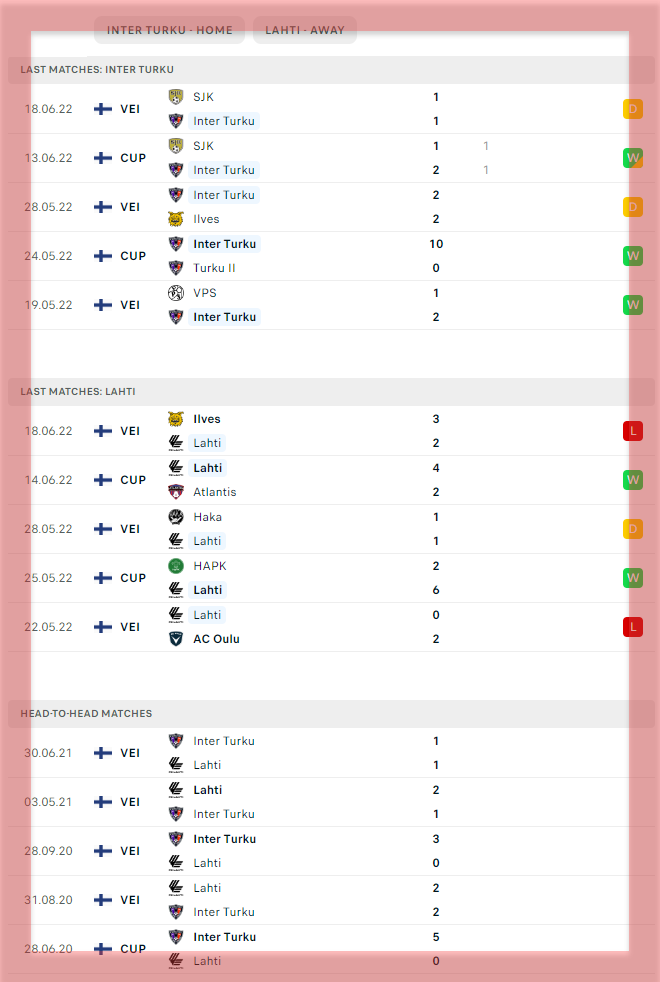