Inter Milan vs Sampdoria – Inter Milan‘s 1-3 victory against Cagliari on Sunday pushed the title chase to the last day of the season. The key architects of the victory were Matteo Darmian and Lautaro Martinez, the latter shining with a brace at Unipol Domus.

However, going into the final day games, the I Nerazzurri don’t have much chance because they can only defend their Serie A title if they beat Sampdoria and AC Milan lose to Sassuolo.

Inter Milan will, of course, be heavy favorites to beat Le Samp on Sunday afternoon at Stadio Giuseppe Meazza, but we fear it may not be enough.

Inter Milan’s victory at Cagliari was their fourth in a row in all competitions. They have conceded at least one goal in each of these four games, including two to Juventus in the Coppa Italia final win at Stadio Olimpico.

In seven of Inter Milan’s previous eight matches in all competitions, the Over 2.5 goals FT & Both Teams To Score option came in.

When they face Sampdoria, who just blasted four goals past Fiorentina on Monday evening at Stadio Comunale Luigi Ferraris, we have plenty of grounds to expect the trend to continue.

Tradition also indicates to a high-scoring match on Sunday in Milano, with the Over 2.5 goals FT & Both Teams To Score bet landing in each of the last six head-to-head encounters between these two clubs.

The run includes a head-to-head match from this season’s Serie A, when these two teams drew 2-2 in Genova in September last year.

Inter Milan has a strong home record against Le Samp, with 17 wins, 7 draws, and only three loses in the previous 27 meetings.

Inter Milan has the greatest attacking record in the league, their recent matches have been jam-packed with goals, and their H2H history with Sampdoria also leads to a high-scoring game. 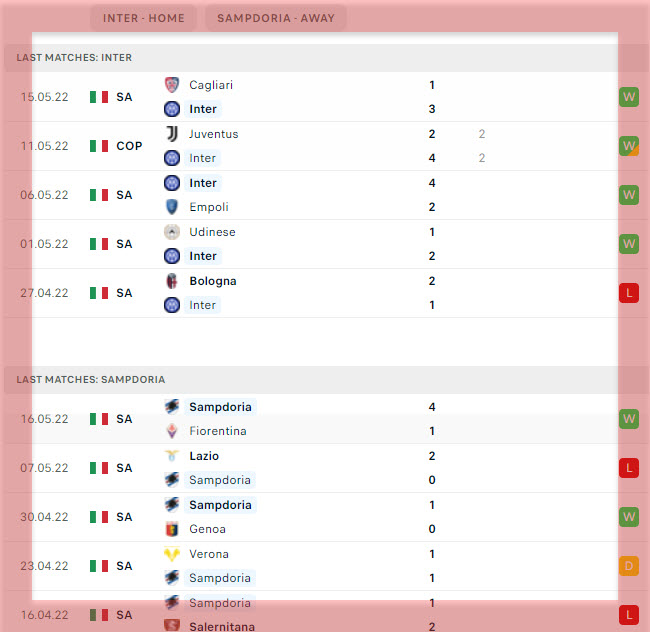