Inter Milan vs Salernitana – Salernitana stunned leaders AC Milan with a 2-2 tie at Stadio Arechi two weeks ago. As the side managed by Davide Nicola travels to Stadio Giuseppe Meazza on Friday evening to face Inter Milan in the first match of Matchday No 28, they will aim to derail the Scudetto hopes of the other Milano club.

Inter Milan will go into the match with a strong desire to end a string of poor outcomes. The reigning champions failed to score for the third consecutive match in all competitions seven days ago, as they were held to a goalless draw away at Genoa.

Inter Milan has now gone four games without a win, and they sorely need to get back on track in order to stay up with Napoli and AC Milan, who are two points ahead of them in the standings.

Inter Milan are heavy favorites to do so on Friday when they face Salernitana, who have the worst attacking and defensive records in the division. However, it’s worth noting that the visitors are coming into this match on the heels of four consecutive draws. The most recent came on Saturday afternoon when Salernitana equalized in the second half of a home match against Bologna (1-1).

When Inter Milan faced Salernitana in the reverse fixture at Stadio Arechi in the first half of the season, they thrashed them 0-5. Before this season, these two teams had not met one other in more than two decades. In their head-to-head meetings during the 1998/99 Serie A season, both teams secured a win.

Inter Milan has been suffering for goals recently, but Salernitana’s visit gives a great opportunity for the champions to reclaim their shooting boots. We expect the hosts to enhance their confidence by winning convincingly in front of their home crowd. At 2.15, you can support Inter Milan to win in a -2.5 Asian Handicap. 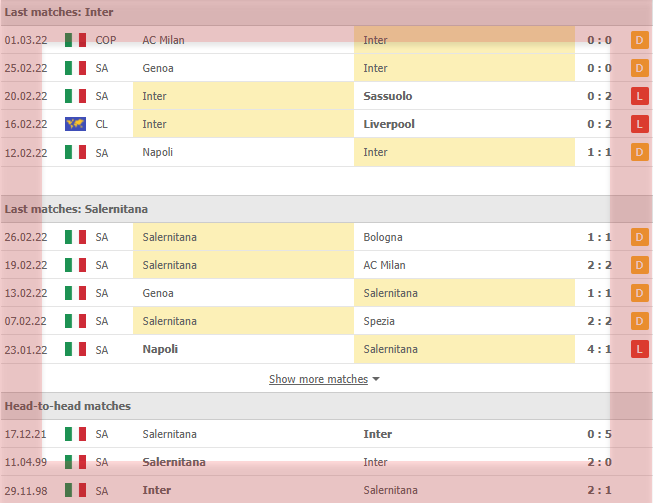