Inter Miami vs Portland Timbers – Inter Miami, a team from the Eastern Conference, has struggled with consistency in their play. With thirteen games under their belt, the team has four victories, three draws, and six losses. Due to their dismal form, the team has remained in the bottom half of the league table, in tenth place, with 15 points from their matches. The club is now undefeated in their last three games.

Inter Miami’s most recent encounter was against New York RB. Inter Miami scored two goals while defending their side, giving them a clean sheet at the end of the game. The game ended with an FT score of 2-0.

The Portland Timbers haven’t had the finest start to the season. They’ve only won three of the thirteen games they’ve played. The team has six draws and five loses from the remaining matches. With 15 points from the matches, the western conference team is tenth on the table. In the last two games, the team has lost consecutively.

The Portland Timbers’ most recent match was against the Philadelphia Union. Philadelphia managed to score two goals but Portland was unable to do so. The game finished with a score of 0-2 in overtime.

In their respective tables, Inter Miami and Portland Timbers share the same number of points. Miami has gone undefeated in its previous three games, while Portland has dropped its last two. In the majority of their recent games, Portland has scored under 1.5 goals.

Miami has the advantage of being able to play on their home turf. Inter Miami has gone undefeated in their last four games, scoring over 1.5 goals in each of them. The Portland Timbers, on the other hand, have yet to win on the road in their last four outings. In three of them, they have also failed to score more than 1.5 goals. Based on the statistics, I anticipate Inter Miami will win this match. We may also predict Miami to score more than 1.5 goals in this encounter. 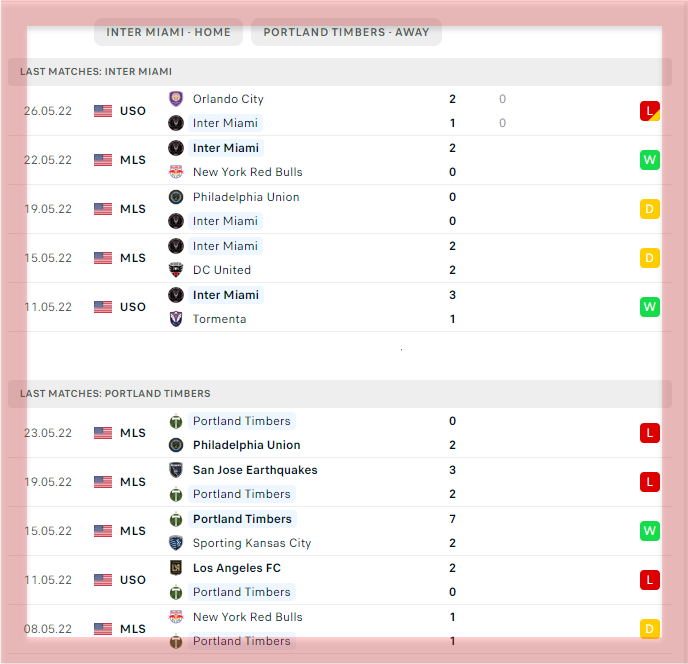