Hungary vs Italy – Preview, and Prediction

Hungary vs Italy – After defeating England 0-4 in the Nations League, Hungary is aiming to win once again. Hungary had 31% of the game’s possession and 6 shots, of which 5 were on goal.

The Hungary backline has put in a lot of work, as evidenced by their more recent scorelines. Hungary has been stingy, with only four goals scored at their end over the course of their last six matches.

Italy and their travelling supporters will be hoping for a better outcome after a setback in their most recent Nations League matchup against Germany.

In that game, Italy had 35% of the possession and 6 of its 14 shots on goal were successful. Wilfired Gnonto (78′) and Alessandro Bastoni (94′) scored goals for Italy.

Italy has been scored against in 5 of their last 6 games, with opponents scoring 12 goals overall. The facts speak for themselves. Italy has not been playing very well defensively. Putting aside previous outcomes, it remains to be seen whether or not that trend will continue in this future game.

Marco Rossi, the Hungary manager, will be grateful that he has no concerns about any player’s fitness going into this game because he has a perfectly healthy bunch to pick from.

Roberto Mancini, Italy’s manager, has no serious concerns about his team’s physical condition going into this game because they are entirely injury-free and ready to play.

Hungary may find it challenging to score against this Italy team, who we believe should just have the advantage. Thus, we anticipate a fiercely contested match that ends with Italy winning 0-1 after 90 minutes.

Hungary vs Italy – Head -to- Head 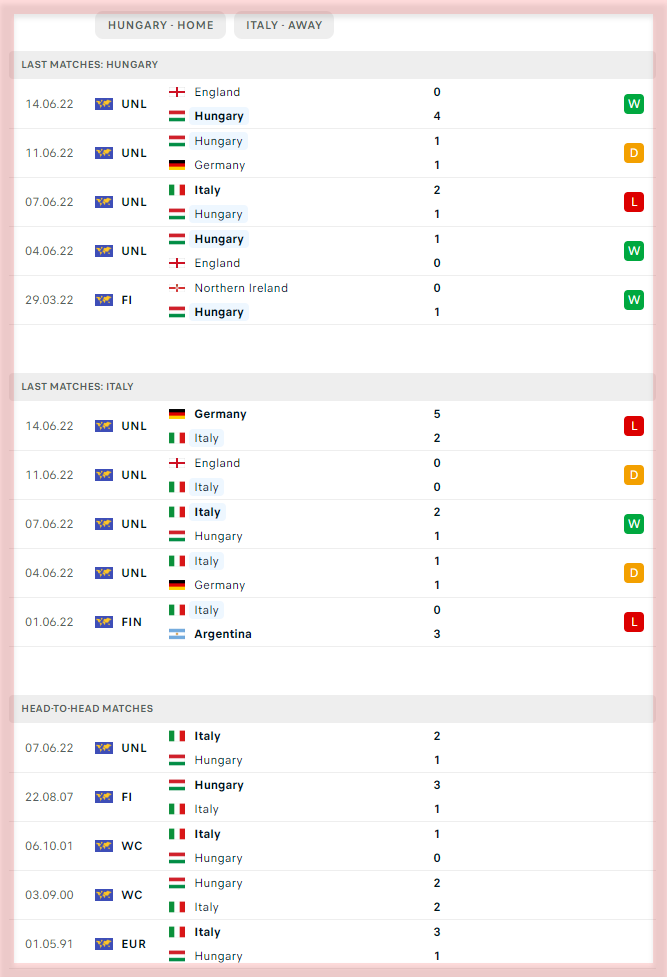