Huesca vs Leganes – Preview, and Prediction

Huesca vs Leganes – Huesca and Leganes 7th round match at Estadio El Alcoraz will serve as the opening act on Saturday’s Segunda Division schedule.

The two sides begin the new campaign with stronger expectations and new managers after finishing the previous season level on points in the middle of the standings.

However, neither team was able to have a strong start to the 2022–23 season. Leganes performed worse than the other clubs, scoring just four points in their first six games. Imanol Idiakez’s team has lost all three of its road games by the same score of 1-0.

Leganes’ inability to come up with innovative attacks is a major problem. In their first six games of the season, they only managed to score three goals. In four of their previous five league games, Idiakez’s team was unable to score. This season, they have yet to score when travelling.

Huesca, on the other hand, didn’t allow a goal in either of their two home victories over Ibiza (3-0) and Malaga (1-0), therefore we have to consider them the favourites to win three straight at Estadio El Alcoraz.

Although they did lose 2-1 away at Alaves the previous weekend, Jose Angel Ziganda’s team should have a good chance to turn things around against the struggling Leganes.

In the previous season of Segunda Division, Leganes defeated Huesca at home and away to clinch the domestic double over them. Huesca had faced Leganes at home four times prior, winning two, drawing one, and losing one. In four of the last six head-to-head matches, both teams scored.

Given that Leganes has lost all three of their road games in this season’s Segunda Division without scoring a goal, Huesca should benefit greatly from having the home field advantage in this match.

Given that both sides have been better defensively than offensively thus far in the season, you may back the home win at the 2.30 odds, and the Under 2.5 goals FT prediction is also worthwhile to consider at the 1.53 odds.

Huesca vs Leganes – Head -to- Head 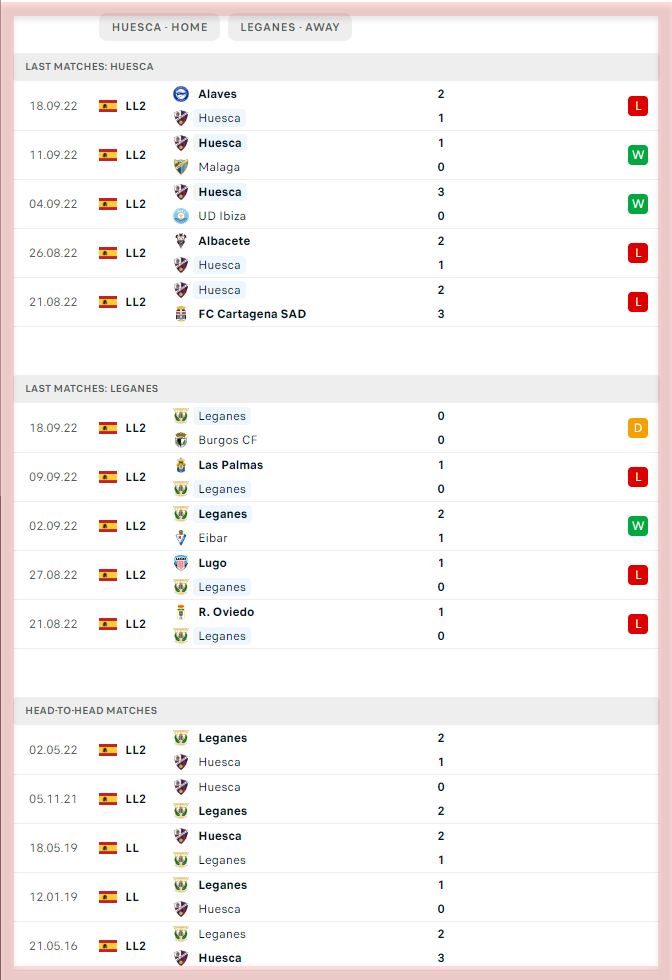