The Houston Dynamo defeated Nashville 2-0 at PNC Stadium, courtesy to a superb defensive performance that saw them retain a clean sheet despite having a player sent off in the 35th minute.

Left-back Adam Lundqvist was sent off early in the game, but Houston held on and even doubled their lead in the second half thanks to Darwin Quintero, who made no mistakes from the penalty spot.

The Houston Dynamo had already eliminated San Antonio in the US Open Cup last 32 round, and this was their second consecutive clean sheet. The Seattle Sounders, on the other side, defeated Minnesota United 3-1 at home to snap a three-match losing streak in Major League Soccer.

With goals from Raul Ruidiaz, Cristian Roldan, and Nicolas Lodeiro in the second half, the new Concacaf Champions League champions turned the game around against the Loons.

Brian Schmetzer can be pleased with his team’s recent attacking form, as they have scored two or more goals in five of their last six games across all competitions.

The last meeting between these two clubs was in October of last year. Only one of the previous four head-to-head meetings between the two teams has resulted in three or more goals.

Houston Dynamo’s defense looked good over the weekend, and their 2-0 win against Nashville SC is precisely what they want to build on going into Sunday match against Seattle Sounders. 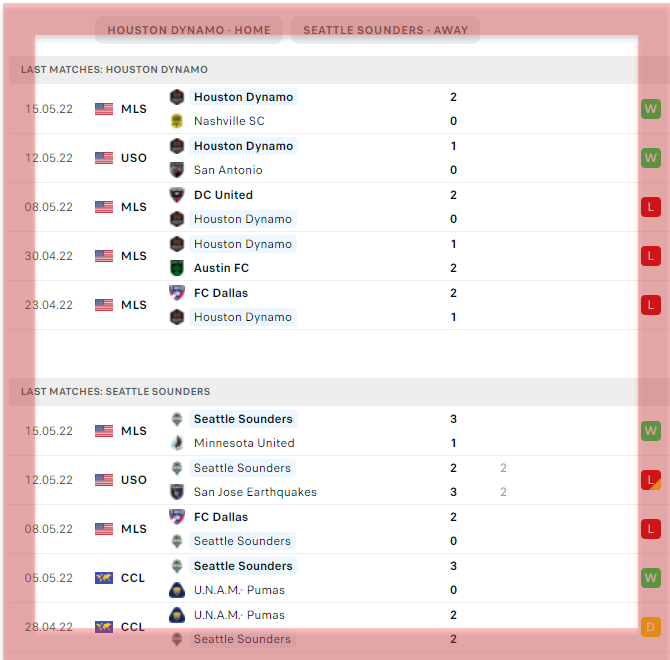