Honka vs Mariehamn – Preview, and Prediction

Honka vs Mariehamn – Honka is now ranked third in the table and has been one of the top-performing clubs in the Finnish first division this season.

They have only lost twice throughout the entire season, and it should be noted that only two other teams have scored more goals than them overall.

Additionally, they are the only group in the league to have won the last three games in a row. Mariehamn, meanwhile, is ranked third-to-last in the league and is one of the weakest teams.

They have lost the majority of their most recent games, and over that time, they have conceded a tonne of goals.

They also have the poorest road record of any team in the competition, losing every single game they have played on the road without a single draw.

Honka have gone unbeaten in eleven of their last twelve games, and in their last thirteen games, they have only failed to score twice.

They have triumphed in four of the previous six matches played here. The most recent match held here had ended in a 1-1 draw.

Honka is currently on a three-game winning streak during which they have scored a total of five goals. They have also gone on two consecutive three-match winning streaks and were unbeaten in thirteen of their previous fifteen overall games.

On the other side, Mariehamn had gone on separate two-fixture and three-game losing streaks while going winless in ten of their previous fourteen games altogether.

In addition, they had misplaced seven of their previous 10 road excursions. These observations suggest that Honka will triumph this weekend. As it stands, tomorrow should see Honka triumph. 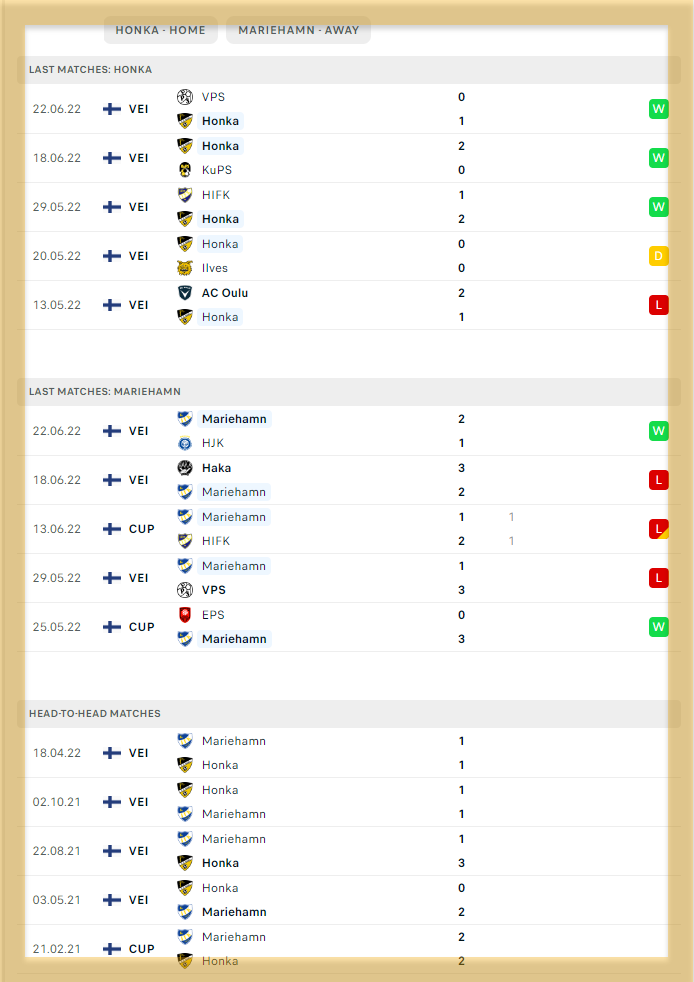