Hoffenheim vs Greuther Furth – Despite a recent decline in the league, Hoffenheim has managed to keep their sixth-place safe zone position. Because they are currently tied for seventh place with Union Berlin, a three-pointer is a requirement for them.

Hoffenheim’s chances of staying in the Europa League’s relegation zone have taken a hit after suffering back-to-back defeats in recent league games.

However, when they encounter Furth in a Bundesliga match tomorrow afternoon at PreZero Arena, they obviously have a chance to take three points.

Furth, on the other hand, hasn’t cut down any trees since the beginning of the season. They’ve only won a handful of times, and as a result, they’re at the bottom of the standings with 16 points. They will be lacking in motivation and will very certainly be relegated.

Furth’s most recent league match ended in a 0-2 defeat at home. Negative performances are so common for them, and positive results have only occurred on a few times in previous league matches.

This game, however, will not be their most rare positive experience. In the history of this head-to-head match-up, Hoffenheim has always been the dominant force.

Hoffenheim won the reverse match with a score of 3-6. Since 2012, Furth has gone winless against Hoffenheim at this site. Hoffenheim has won seven of their last ten home games in all competitions.

They’ve had success scoring goals at a high rate, and given Furth’s weak defense, we can anticipate them to continue to do so. On the other hand, Furth is in bad shape on the road.

They haven’t won in a long time when wearing away jerseys, and with such a tendency in place, we can’t back them to win this match. As a result, we are betting on Hoffenheim to win tomorrow against Greuther Furth. 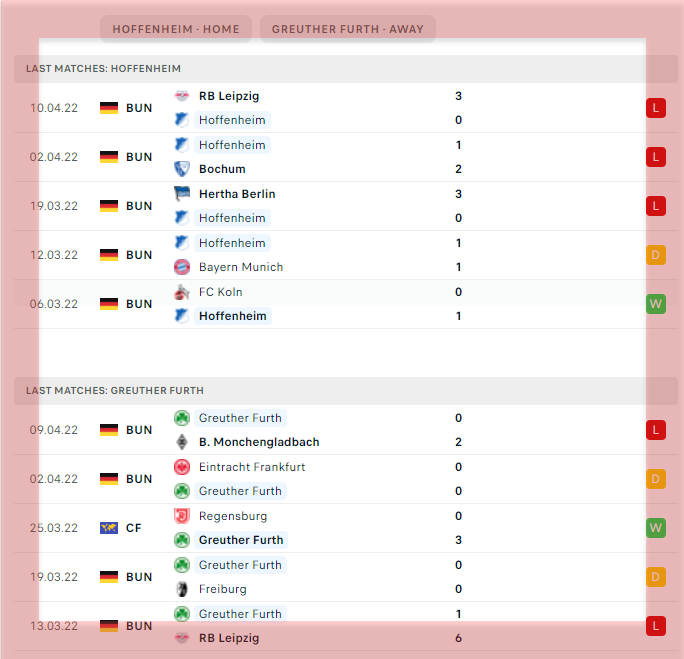