HJK vs Real Betis – Fans of HJK will hope for a repetition of their most recent victory over SJK by a score of 1-0 in the Veikkausliiga. Anthony Olusanya scored the lone goal for HJK in the nineteenth minute.

It has been a great time for the HJK backline, according to their most recent results. Due to HJK’s stinginess, only two goals have been scored at their end over the course of their last six games.

Real Betis and its travelling supporters will hope for a better outcome after experiencing defeat to Real Madrid in La Liga competition the last time around.

Real Betis enjoyed 50% of the possession in that game and 4 of their 8 shot attempts were successful. Sergio Canales (17′) was the lone Real Betis player to score.

Real Madrid had 22 shots on goal, four of which were on goal. Real Madrid scored goals through Vinicius Junior (9′) and Rodrygo Goes (65′). The Real Betis defence has put up a string of diligent performances, leaving them with 3 goals overall from their last 6 games. They have scored nine goals on their own over that time frame. But this tendency won’t necessarily continue into the game.

For HJK manager Toni Koskela, Manuel Martic (leg injury), Roope Riski (knee injury), and Valtteri Moren (knee injury) won’t be able to play. Real Betis manager Manuel Pellegrini has no fitness worries going into this game because he has a totally healthy roster to select from.

Martn Montoya and Loren Morón are the players that are ineligible for this match due to suspension. Real Betis, in our opinion, should capitalise on some of their chances and hold a majority of the possession.

HJK, in comparison, may struggle to score their own goals, despite the fact that we believe they will ultimately succeed in doing so here. As a result, we anticipate Real Betis will win by a score of 1-3 in the end. 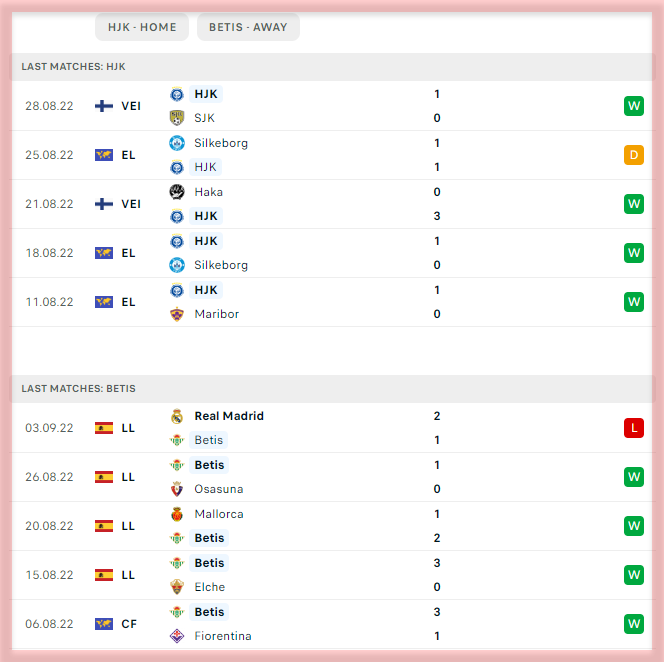