HJK vs Kuopion Palloseura – This season’s top two teams in Finland have both been the best, and as a result, they are ranked first and second on the table.

The fact that they are only three points apart makes this forthcoming match much more crucial. The momentum in the title chase will belong to whoever wins this match this weekend at the Bolt Arena.

The pair has been prolific goal scorers since the beginning of the season, and they anticipate continuing that trend this weekend.

Tomorrow’s game between HJK and KuPS is crucial because teams that are now ranked below them have stepped up their efforts in an effort to pass these two at the top of the standings.

As the two top clubs in the league face off against one other, expect goals to come from either end of the field.

In two of the last three games, both teams scored.

The last six victories have been evenly shared between the two teams, with three victories each, and in five of the last seven encounters, both teams scored. The most recent game played here had ended in a 1-1 draw.

HJK had won three consecutive three-game winning streaks and had gone undefeated in sixteen of their previous nineteen games overall.

They had also managed six victories while remaining unbeaten in seven of their previous ten games played here.

On the other hand, KuPS had triumphed in fourteen of the previous seventeen encounters as a whole and had scored two goals or more in nine of their previous fifteen games.

In recent games, HJK hasn’t been able to avoid conceding much. In fact, HJK has conceded seven goals in five of their previous six matches as a result of being scored against.

Four goals have been allowed in their last six games combined thanks to several strong defensive performances from the KuPS players. The two top-ranked clubs in the Finnish premier division appear to be in for a high-scoring thriller. 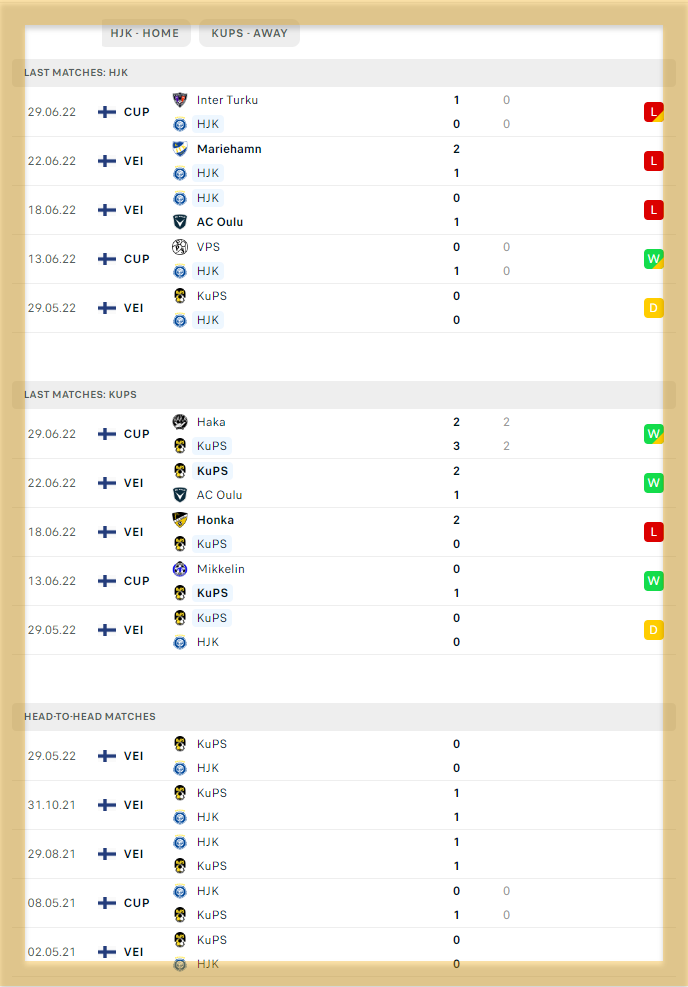