Hibernians vs Shamrock – Preview, and Prediction

Hibernians vs Shamrock – For the first time since the 2017–18 campaign, Hibernians hopes to advance to the second round of Champions League qualifying.

The Maltese champions, who lost 3-0 to Ireland last week, need to pull off an incredible comeback if they want to advance to the next round.

With a significant victory needed on Tuesday, Hibernians will try to capitalise on their strong home form after winning 13 of their previous 14 competitive games.

Although five victories in their previous six home matches in Europe won’t give them much hope going into Tuesday’s encounter.

Hibernians will have to make do with a spot in the Europa Conference League qualifying rounds if they are unable to produce a comeback in the second match.

Shamrock Rovers, meanwhile, will feel they have done all necessary to get to the second round after winning the first leg 3-0 at home.

The visitors on Tuesday haven’t suffered a three-goal defeat since Dundalk defeated them 5-2 in league play in June 2018, which gives them hope going into the second leg.

If Shamrock Rovers are successful in finishing the task, they will play either Sutjeska or Ludogorets Razgrad in the second round of qualifying.

In an effort to perform a stunning comeback, Hibernians will try to take full advantage of home advantage on Tuesday. Shamrock Rovers, however, showed last week how talented their team is, and we predict that the Irish champions will be too strong for their opponents in the second leg.

After falling to Shamrock Rovers 3-0 in the UCL Qualifiers, Hibernians will be seeking to improve on their previous performance here.

In recent games featuring Shamrock Rovers, there has been a pattern of at least one team failing to score. Their last six games reveal that this has occurred five times. In those games, Shamrock Rovers scored nine goals while their opponents only managed to score two. However, it’s possible that this pattern won’t continue into the subsequent game. 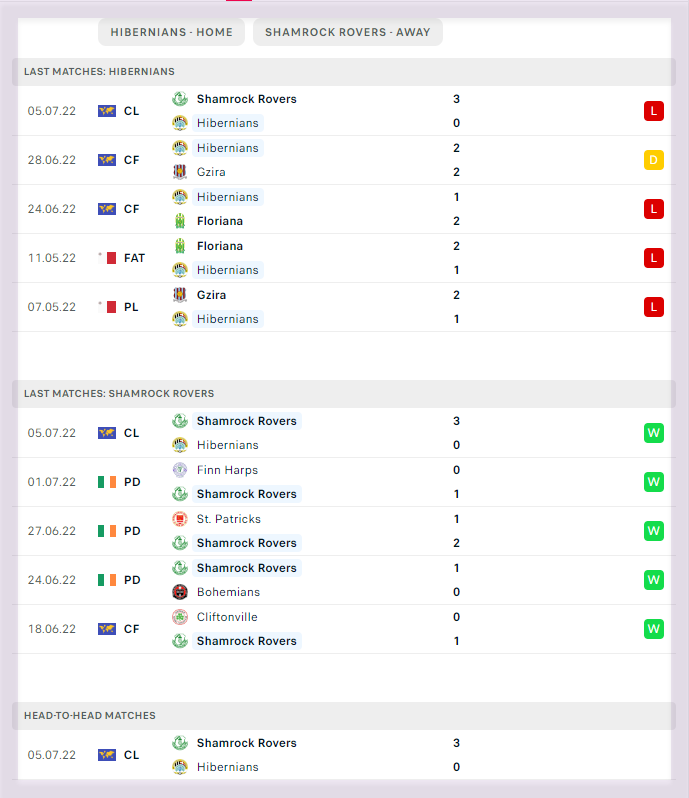