Hertha Berlin vs Union Berlin – Hertha Berlin will be seeking to improve on their previous performance here after a 0-5 Bundesliga 1 defeat against VfL Wolfsburg in their most recent match.

Hertha Berlin enjoyed 42% of the game’s possession and none of its 8 shots, which were on goal, were successful. five of Wolfsburg’s 17 shots on goal were on target.

Hertha Berlin had not beaten Union Berlin in their previous four league games coming into this encounter.

Following a 3-1 Bundesliga 1 victory over Hoffenheim in their previous game, Union Berlin enters this encounter with a winning record.

Union Berlin had 52% of the ball during that game and attempted 22 goals, three of which were successful. The goals were scored by Jamie Leweling (96′) and Danilho Doekhi (73′, 89′) for Union Berlin.

While none of the 12 efforts on goal by 1899 Hoffenheim were on target. Hoffenheim’s goal came from Ihlas Bebou (43′).

Looking at their recent results, Union Berlin has allowed goals in 5 of their previous 6 games, totaling 13 goals from the opposition.

Union Berlin’s defense hasn’t exactly been that strong. Nevertheless, we’ll simply have to wait to see if that pattern will repeat itself in this game or not.

Looking at their most recent head-to-head matchups going back to 04/12/2020, Hertha Berlin has won one, Union Berlin has won four, and there have been one match drawn.

The last league encounter between these teams was played on Bundesliga 1 Match Day 1 on August 6, 2022, with Union Berlin defeating Hertha Berlin 3-1.

Three of Hertha Berlin’s seven shots on goal were on target. Dodi Lukébakio scored in the 85th minute. Marco Fritz acted as the official.

We believe it will be challenging for Hertha Berlin to get past the Union Berlin defense, who we believe will score and maintain their lead.

Regarding the current betting odds on the win-draw-win market, a victory for Hertha Berlin is available for 3.52, backing a drawn result is 3.3 & staking on a win for Union Berlin can be had at 2.15. Those are the top returns offered at the moment. 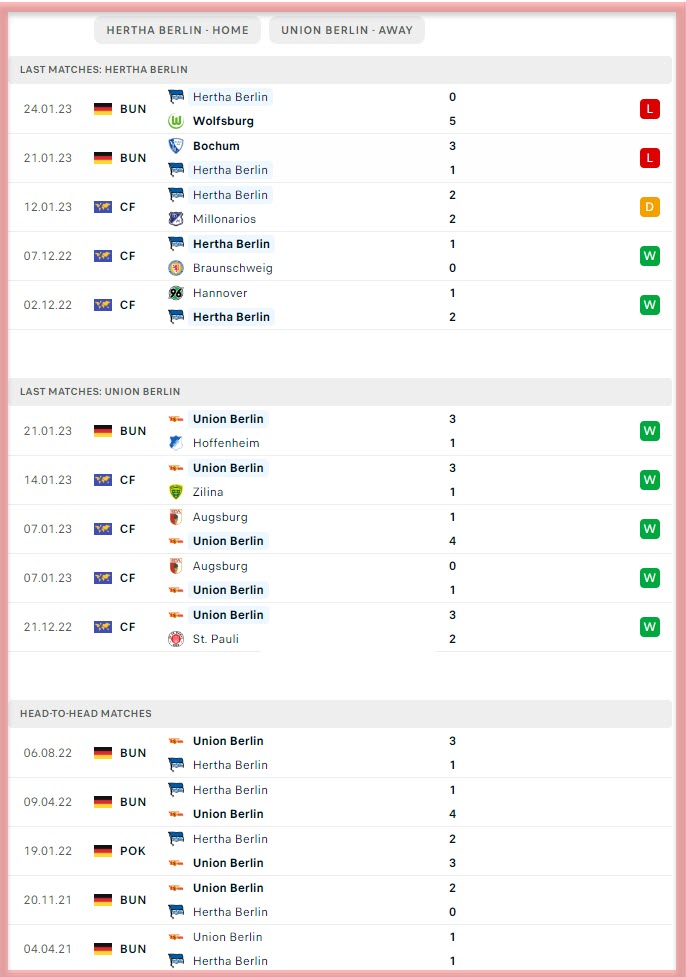